Update Required To play the media you will need to either update your browser to a recent version or update your Flash plugin.
By VOA
22 September, 2015

Should we fear an invasion from outer space?

Researchers have been searching and listening for life on other planets. They say we should not be concerned about alien beings any time soon.

Michael Garrett teaches at the University of Leiden. He is also the General and Scientific Director of the Netherlands Institute for Radio Astronomy.

Professor Garrett has been listening for radio signals from other planets, searching for signs of extraterrestrial life. He says advanced civilizations are either rare or do not exist in the areas of outer space he has examined. He adds that natural processes are most likely responsible for any radio signals that have been received on Earth. 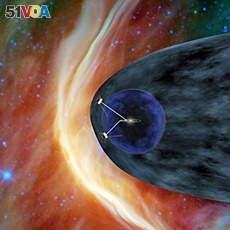 This artist's picture showing NASA's two Voyager spacecraft exploring an area of space known as the heliosheath. It is the outer shell of the bubble of charged particles around our sun.

He says that means "we can all sleep safely in our beds tonight. An alien invasion doesn't seem at all likely."

German researchers say they have discovered that some birds, like humans, can be choosy when deciding on a possible mate.

The researchers work at the Max Planck Institute for Ornithology. They performed experiments with Zebra Finch. They let groups of 20 female Zebra Finches freely choose their mate from among 20 males.

Half of the resulting pairs were permitted to produce baby birds. The researchers split up the other couples and gave them a mate that the birds had not chosen themselves.

The study found that the finch couples that chose one another produced many more babies than those that were forced together.

There are many good reasons not to smoke tobacco. Researchers have added another: Smokers have a higher risk of losing their teeth than non-smokers.

Thomas Dietrich was the main writer of the report. He is a professor at the University of Birmingham in England. He says most people lose their teeth from either tooth decay or gum disease, both of which can be caused by smoking.

Because smoking can also hide gum disease, smokers may not know about the poor health of their mouths until it is too late and they start losing teeth.

The study found that it is not only older people who lose their teeth. Researchers discovered that the connection between smoking and tooth loss was stronger among younger people than those who were older.

VOA's Rick Pantaleo reported these stories from Washington. Christopher Jones-Cruise adapted them for Learning English. George Grow was the editor.

Words in These Stories

alien – adj. foreign; from a different land or planet

extraterrestrial – adj. coming from our existing outside the Earth

pair – n. two people or creatures that do something together

decay – v. to slowly be destroyed by natural processes

We want to know your thoughts on these stories. Write to us in the comments section.