Update Required To play the media you will need to either update your browser to a recent version or update your Flash plugin.
By Gregory Stachel
08 July 2022


Biologists in the American West are worried about an invasive kind of fish recently found in part of the Colorado River.

Biologists have been working there to protect native fish which are threatened by the appearance of the smallmouth bass.

National Park Service fisheries biologist Jeff Arnold found three young smallmouth bass in the lower Colorado River recently. The park service confirmed that the fish had been found and were likely reproducing in the Colorado River below the Glen Canyon Dam in the Southwestern state of Arizona. 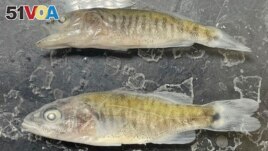 The Colorado River is a major river of North America. It travels through parts of seven western U.S. states. Construction of the Glen Canyon Dam formed Lake Powell.

Smallmouth bass are a popular sport fish. But they feed on another kind of fish called the humpback chub. The humpback chub is an ancient fish that is native to the river but is threatened. Biologists like Arnold have been working to help the threatened fish recover.

Predators like the smallmouth bass have caused problems for the upper river's environment. But they were held back for years in Lake Powell by the Glen Canyon Dam.

However, with water levels dropping, the invasive fish have gotten past the dam and closer to where the chub remain.

Brian Healy has worked with the humpback chub for more than 10 years. He established the Native Fish Ecology and Conservation Program.

Healy said, "It's pretty devastating to see all the hard work and effort you've put into removing other invasive species and translocating populations around to protect the fish and to see all that effort overturned really quickly."

As lake levels drop, non-native fish that live in warm surface waters in Lake Powell are getting closer to the dam and its penstocks. Penstocks are underground steel tubes that carry water to machines that produce electricity from the water current. The water is then released on the other side of the dam.

If predator fish continue to flow through the penstocks and populate the river below the dam, they could harm native fish. That could undo years of work restoring the river's environment.

The chub almost disappeared years ago. But the fish have come back with help from fish biologists and scientists and engineers. Agencies spend millions of dollars each year to keep invasive species under control in the upper part of the river.

The Endangered Species Act is a law that requires government agencies to act in ways that will not harm threatened animals. That includes structures like the Glen Canyon Dam.

Federal, state, and other government leaders are expected to release a plan in August containing ideas for policymakers. Their aim is to control smallmouth bass and other predatory fish below the dam.

The National Park Service, U.S. Geological Survey, and Arizona Game and Fish Department are moving quickly to try and contain the problem. During an emergency meeting, they decided to increase efforts to follow fish populations and block off the part of the river where the smallmouth bass were found.

Arnold said the nets being used cannot keep out smaller fish. But he noted it is the best his group can do with available resources.

Experts say leaving more water in Lake Powell would be the best answer. But that is difficult under current dry conditions.

In June, the Department of the Interior told the seven states that depend on the Colorado River to save nearly 5 billion cubic meters of water. It is unclear where that water will be stored. But Healy hopes Lake Powell is being considered.

translocate – v. to cause something to be moved from one place or position to another

net – n. a device that is used for catching or holding things or for keeping things out of a space and that is made of pieces of string, rope, or wire woven together with spaces in between