Invasive Fruit Tree Reported Across the US

Update Required To play the media you will need to either update your browser to a recent version or update your Flash plugin.
By Gregory Stachel
26 April 2022


In the early 1900s, the U.S. Department of Agriculture (USDA) requested an order of Callery pear tree seeds from China. The agency hoped the seeds might be a solution for a bacterial disease harming American pear production.

Today, however, experts from the USDA are studying the best ways to kill Callery pear trees. The flowering fruit trees have become aggressive, invasive plants.

University of Cincinnati researchers Theresa M. Culley and Nicole A. Hardiman wrote about the plant’s history in 2007 for the publication BioScience. They said that, in the early 1900s, a bacteria called fire blight was badly hurting the production of pears in the U.S. Scientists discovered that combining a pear tree that produced the edible fruit with the Callery pear tree created a specimen that could survive the bacteria. 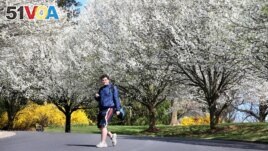 Over the years, 25 different kinds of ornamental trees were created from this combination. The well-known Bradford pear tree was one of them. All of them were able to survive difficult conditions and were planted across the United States.

In 1971, the U.S. Department of Agriculture even created a small publication about their care. The agency described them as trees that flower several times during the year and do well in many climates and soils.

That ability to survive easily is part of what makes the trees invasive.

Seeds from the inedible fruit that the trees produce can spread easily. In addition, the roots can produce above-ground growth. If the growth is not cut down often to stop it from flowering, it can create a fertile seed with the rest of the tree.

It is possible for a wild population to come from a single tree that someone plants on their property, said Culley, one of the University of Cincinnati researchers.

But the city is no longer planting them, Kastanis said. Cities in Virginia, South Carolina, Ohio, and Indiana have also banned or are banning the sale of all kinds of Callery pear trees.

Some states, including Missouri and Alabama, are asking homeowners and landowners to stop planting them or to cut existing ones down and use chemicals on what remains. Other states, including North Carolina, are offering free native trees to landowners who show photographic evidence that they have cut down Callery pears on their property.

Without regular work and attention, fields near seed-producing trees can be covered with small seedlings within a couple of years, said scientist James “J.T.” Vogt. He is a scientist at the U.S. Forest Service’s Southern Research Station in Athens, Georgia.

“They’re a real menace,” said Jerrod Carlisle. He lives in southern Indiana. He discovered that four trees on his property and one on his neighbor’s property had created thousands more of the trees on 20 hectares of land.

He and his 17-year-old son have cut down an estimated 1,400 Callery pears. But he estimates that there are about 1,000 more to go.

Carlisle thinks he is finally getting ahead of his invasion. Native trees that have been planted for reforestation are creating enough shade to finally slow the growth of Callery seedlings.

specimen – n. something (such as an animal or plant) collected as an example of a particular kind of thing

seedling – n. a young plant that is grown from seed

menace – n. a dangerous or possibly harmful person or thing