Investigators: Missile That Hit Malaysian Airliner in 2014 Came from Russia

Update Required To play the media you will need to either update your browser to a recent version or update your Flash plugin.
By Christopher Jones-Cruise
28 September, 2016


International investigators say a missile transported to Ukraine from Russia was responsible for shooting down Malaysia Airlines Flight MH17.

The Malaysian airplane crashed over eastern Ukraine in July 2014.

The investigators released their findings Wednesday. They confirm an earlier investigation by the Dutch Safety Board. It found that the plane was brought down by a Russian-made surface-to-air missile. Russia has denied the Dutch finding. 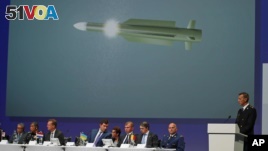 Wilbert Paulissen of the Joint Investigation Team (JIT) speaks on the preliminary results of the investigation into the shooting-down of Malaysia Airlines jetliner flight MH17 during a press conference in Nieuwegein, Netherlands, Sept. 28, 2016.

On Wednesday, investigators said there is strong evidence that the territory from which the missile was fired "was controlled by pro-Russian fighters."

The earlier investigation identified a 320-square kilometer area from which the rocket launch must have taken place. The investigators did not state clearly who fired the missile. But all of the land was under the control of separatists fighting Ukrainian forces.

Wednesday, Russia said information from its radars proved that no rocket was fired from within territory held by pro-Russian separatists in Ukraine.

Dmitry Peskov is a spokesman for the Russian government. In a telephone call with reporters, he said Russian radar had identified all flying objects over the rebel territory, and did not show a rocket had been fired.

"The data are clear-cut...there is no rocket," he said. "If there was a rocket, it could only have been fired from elsewhere."

All 298 people on the aircraft died after it broke apart while on a flight from Amsterdam to Kuala Lumpur, Malaysia.

The majority of passengers were Dutch. Many were scientists planning to attend an international AIDS conference in Australia. The plane was also carrying citizens of Australia, Belgium, Malaysia and Ukraine.

Wednesday morning, before the announcement of the findings, officials met with family members of some of the people who died in the crash.

One of the family members -- Robby Oehlers -- told the Reuters news service the investigation had identified 100 people who could have launched the rocket. He said they found that it was launched from within rebel-held territory.

VOA's Joshua Fatzick and Wayne Lee reported this story from Washington. Christopher Jones-Cruise adapted it into Special English. George Grow was the editor.

board – n. a group of people who have been chosen to learn information about something, to give advice, etc.

aircraft – n. a machine (such as an airplane or a helicopter) that flies through the air