On to New Hampshire for US Presidential Candidates

Update Required To play the media you will need to either update your browser to a recent version or update your Flash plugin.
By Bruce Alpert
03 February, 2016

Senator Ted Cruz of Texas finished first in the state's Republican caucuses. This surprised many observers who expected businessman Donald Trump to win the most support.

After his second place finish in Iowa, Trump congratulated Cruz and Rubio. "On to New Hampshire," he said. The presidential candidates are in the New England state this week. New Hampshire will hold its presidential primary election on Tuesday. 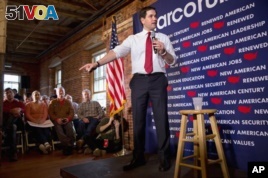 Because of what happened in Iowa, there are now two less candidates seeking the Republican presidential nomination.

Senator Rand Paul of Kentucky suspended his campaign Wednesday after finishing with less than 5 percent of the vote in Iowa. On Monday night, former Arkansas Governor Mike Huckabee dropped out of the race after winning only 2 percent of the Iowa vote.

On the Democratic field

A third candidate, former Maryland Governor Martin O'Malley, dropped out of the race Monday night after a poor showing in Iowa.

In the New Hampshire primary, Clinton will be the underdog to Sanders. He represents the state of Vermont, New Hampshire's western neighbor.

Grant Reeher teaches political science at Syracuse University in New York. He said this about the Democratic race:

"Iowa showed the social movement that is behind Sanders' campaign is real, and it is going to be a force in the campaign in the long term."  However, Sanders remains "a long shot to actually win the nomination," he added.

Here is what other political observers are saying:

"The loss (in Iowa) raises the possibility that Mr. Trump's strength is at least partly an illusion," wrote Nate Cohn in the New York Times. "He may not be quite as strong as he looks,"

Rubio's strong third-place finish puts him in the position to claim the Republican establishment vote, some experts wrote.

"He over-performed expectations," wrote Amber Phillips in the Washington Post. "And for that, Rubio, perhaps almost as much as Cruz, can call Monday a win."

Jim Malone reported on this story for VOANews. Bruce Alpert adapted his report for Learning English. George Grow was the editor.

We want to hear from you. Write to us in the Comments Section or share your views on our 51voa.com

underdog – n. a person that is likely to lose a contest

illusion – n. something that looks or seems different from what it is

agenda – n. a list of things to be considered or done