Update Required To play the media you will need to either update your browser to a recent version or update your Flash plugin.
By Bryan Lynn
12 April 2021


Iran has accused Israel of carrying out an attack on a nuclear center that damaged equipment and caused a power outage.

Iranian officials called Sunday's incident at the Natanz nuclear center an act of "nuclear terrorism." They said centrifuges were damaged at the plant. A centrifuge is a device used to increase the purity of uranium for nuclear purposes. 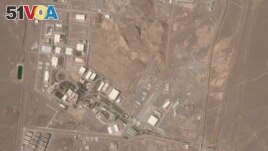 Media organizations reported the Israeli government was behind the action, which was described as a cyberattack. However, Israel did not claim responsibility for an attack or comment directly on the incident.

Speaking to reporters Monday, Israeli Prime Minister Benjamin Netanyahu said Israel would continue efforts aimed at preventing Iran from gaining a nuclear weapon. He said such a device would give Iran the ability "to carry out its genocidal goal of eliminating Israel." He added that Israel "will continue to defend itself against Iran's aggression and terrorism."

A former chief of Iran's paramilitary Revolutionary Guard, General Mohsen Rezaei, said in a message on Twitter that the attack had started a fire.

Iran's Foreign Ministry spokesman Saeed Khatibzadeh said the country's answer to the action should be "to take revenge against Israel." He did not comment further, but added that Israel "will receive its answer through its own path."

Khatibzadeh confirmed that centrifuges at the plant had been damaged. The incident took place one day after Iran announced it had launched new, advanced centrifuge machines at Natanz. Khatibzadeh said only the older centrifuges were damaged.

Iran's improvements in centrifuge technology are designed to permit the country to process uranium faster.

Since January, Iran has begun enriching uranium to as high as 20 percent purity, a technical step away from weapons-grade levels.

The incident came after negotiations began last week in Vienna aiming to bring the United States back into a 2015 nuclear deal with Iran. The deal -- which the U.S. left in 2018 under President Donald Trump -- restricts Iran's nuclear program in exchange for easing U.S. and international sanctions.

The U.S. reestablished economic sanctions after withdrawing from the agreement. Iran answered by violating some of the terms of the deal.

In Vienna, officials from the U.S. and Iran were holding indirect talks. Also taking part were representatives from countries still in the nuclear deal -- Britain, China, France, Germany and Russia.

U.S. Defense Secretary Lloyd Austin arrived Monday in Israel for talks with Netanyahu and other officials. When asked by reporters whether the nuclear discussions might be affected by the incident at the plant Lloyd said, "Those efforts will continue."

In a statement, the White House said it knew about the Natanz attack and that "the U.S. was not involved in any manner."

cyberattack – n. an attempt by attackers to damage or destroy a computer network or system

eliminate – v. remove or get rid of something

sanction – n. a restriction, usually limiting trade, that are meant to cause a country to obey international law

manner –n. way or method that something is done