Update Required To play the media you will need to either update your browser to a recent version or update your Flash plugin.
By Susan Shand
09 February, 2018

Then, they spent an hour searching the couple's belongings, including their clothing and valuables. They also forced the couple to provide passwords to their email and social media accounts.

Neither Rezaian nor Salehi were killed.

But, the raid demonstrated how threatened Iran is by the internet. The government has worked long and hard to control cyberspace and social media and, as a result, the flow of information to the public.

In the past four years, Iranian officials have permitted wider use of the internet, hoping that will help create a modern economy. Today, almost half the population has smartphones. This means they also have cameras and internet links permitting broadcast by anyone to anywhere.

Such smartphones helped spread protests across Iran earlier this year. The government contained the activities by shutting down important social media and messaging apps. But, the lesson was clear: the same technology that can aid business can also support anti-government activism.

So, the government created a separate internet. The so-called "halal net," is a locally controlled version of the internet aimed at restricting the flow of information.

Sanam Vakil is an Iran researcher at Chatham House, a non-profit policy organization. He said the Iranian government "has taken the internet and effectively used it for its own purposes and also has realized the dangers of it as well." 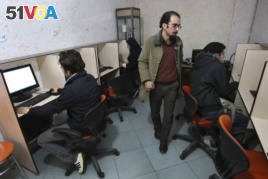 Since the 1979 Islamic Revolution, the spread of information in Iran has been tightly controlled.

State-run media provides the only television and radio broadcasts. Satellite television equipment is banned but many people use it anyway. The government dictates what the press can cover and where reporters can travel.

And the world watched a phone camera video of the shooting death in Tehran of 26-year-old demonstrator Neda Agha-Soltan. The video spread quickly in Iran and around the world. Her face became a symbol of anti-government struggle.

Even before the 2009 protests, Iran blocked sites such as YouTube, Twitter and Facebook. Some Iranians began using virtual private networks, or VPNs, which allow users to avoid government censorship. 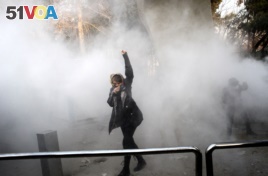 An Iranian woman raises her fist amid the smoke of tear gas at the University of Tehran during a protest, in Tehran, Iran, Dec. 30, 2017.

Growth of smartphones and apps

The encrypted messaging platform Telegram became extremely popular among Iranians. An estimated 40 million people use it for everything from social interactions to business and political activity.

During the recent protests, Iranians used Telegram's mass-messaging system to share information and videos across 75 cities and towns where demonstrations took place. Some showed people openly in the streets shouting, "Death to Khamenei!" The actions were shocking as such language can lead to a death sentence.

When the government temporarily blocked Telegram and Instagram, it helped end the protests within days. However, the action also caused problems for the many businesspeople who use the platforms to sell goods.

After the demonstrations, Rouhani argued it was not possible to try to stop this tool of modern life.

"If you want cyberspace to be useful to the community, come forward with a solution using it to promote the culture instead of blocking it," he said, noting that past Iranian government tried to stop people from listening to the radio. "But this prevention was useless," he said.

FILE- In this Wednesday, Sept. 20, 2017 file photo, Stuart Davis, a director at one of FireEye's subsidiaries speaks to journalists about the techniques of Iranian hacking, in Dubai, United Arab Emirates. (AP Photo/Kamran Jebreili, File)

The network has some 500 government-approved national websites. They stream content much faster than those based outside of Iran, partly because Iran slows those, according to a recent report by the Campaign for Human Rights in Iran.

Customers that use only the NIN websites also pay much less for the service. The telecommunications company that built NIN is owned by Iran's Revolutionary Guard.

Firuzeh Mahmoudi, the executive director of the San Francisco-based group United for Iran, said authorities have had success in getting businesses to use the NIN. The more they do so, she warned, "the easier it will be for them to shut down... the real internet when they want to."

Some government officials have suggested removing Iran entirely from the open internet, including the powerful Ayatollah Ahmad Khatami. The leader of Friday prayers in Tehran recently told worshippers, "When cyberspace was closed down, the sedition was stopped," he said.

The U.S. Treasury said the Guard, Iran's Supreme Council of Cyberspace and other officials were censoring the internet. U.S. officials say top Trump administration officials have met with Google, Facebook, and Twitter to discuss the issue.

But some internet companies fear U.S. sanctions if they operate in Iran. This prevents Iranians from using many encrypted communication apps or VPNs.

Morad Ghorban is with the Washington-based Public Affairs Alliance of Iranian Americans. He said the group believes the U.S. could do more to aid the free flow of information in Iran.

Such a movement, he said, "has continued despite persecution by hard-line elements."

This story was reported by the Associated Press. Susan Shand adapted this story for Learning English. Caty Weaver was the editor.

account – n. an agreement and information that lets a person use an online service such as email

cyberspace – n. what exists on computer networks and the internet

app – n. (application) a computer program designed to do one or a group of related tasks

VPN –n. (virtual private network) a method employing encryption to provide secure access to a remote computer over the Internet

censorship – n. the suppression or prohibition of any parts of books, films, news, etc. that are considered obscene, politically unacceptable, or a threat to security

encrypt – v. to conceal data in (something) by converting it into a code.

sedition – n. conduct or speech inciting people to rebel against the authority of a state

persecution – n. to treat someone or a group cruelly or unfairly for racial, ethnic, religious, political or other reasons

hard-line – adj. a forceful or strict way of behaving when dealing with other people