Update Required To play the media you will need to either update your browser to a recent version or update your Flash plugin.
By Dan Novak
15 August 2022


An Iranian official Monday denied that Iran was involved in the attack on writer Salman Rushdie.

However, the official sought to justify the attack in the country's first public comments on the incident.

The statement came from Nasser Kanaani, the spokesman for Iran's Foreign Ministry. The comments came three days after Rushdie was stabbed several times during a talk in the U.S. state of New York. The attack left him seriously injured. 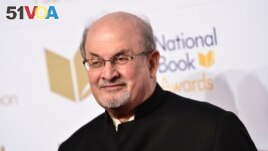 Rushdie's business agent said Sunday that the writer is "on the road to recovery," and was no longer on a breathing machine. Rushdie is 75 years old. He suffered damage to his liver. Nerves in an arm and in one of his eyes were cut. He is likely to lose the eye, his agent said. He remains in serious condition.

"Though his life changing injuries are severe, his usual...sense of humor remains intact," Rushdie's son Zafar Rushdie said in a Sunday statement.

Rushdie has faced death threats for more than 30 years over his book The Satanic Verses. Muslim leaders considered the representation of the Prophet Muhammad in the book to be blasphemous.

In 1989, Iran's supreme leader, Ayatollah Ruhollah Khomeini, issued a fatwa, or Islamic ruling, demanding the writer's death. While Iran has not paid attention to Rushdie in recent years, the fatwa still stands.

Also, a partly official Iranian organization had offered over $3 million for the killing of the writer. It has not commented on the attack.

"Regarding the attack against Salman Rushdie in America, we don't consider anyone deserving reproach, blame or even condemnation, except for (Rushdie) himself and his supporters," Kanaani said.

He added, "no one can blame the Islamic Republic of Iran."

Iran has denied carrying out other attacks in foreign countries against political opponents in the years since the country's 1979 Islamic Revolution. But investigators and Western governments have blamed such attacks on Iran.

Rushdie was attacked Friday as he was about to give a talk in New York state. His accused attacker was 24-year-old Hadi Matar. He told a court he was not guilty of the attempted murder and attack.

Police in New York have offered no reason for the attack. But District Attorney Jason Schmidt noted the promised payment for an attack on Rushdie. He argued against bail during a hearing for the suspect over the weekend.

Matar was born in the U.S. to immigrant parents from a small town in southern Lebanon near the Israel border. Flags of the Iranian-backed Shiite militant group Hezbollah hang across the town. There are also pictures of Hezbollah and Iranian leaders there.

Village records show Matar holds Lebanese citizenship and is a Shiite Muslim, an official there said. The official said Matar's father lives there but has been in hiding since the attack.

In his remarks Monday, Kanaani added that Iran does not "have any other information more than what the American media has reported." He also suggested that Rushdie brought the attack on himself.

"Salman Rushdie exposed himself to popular anger and fury through insulting the sacredness of Islam and crossing the red lines of over 1.5 billion Muslims," Kanaani said.

U.S. Secretary of State Antony Blinken did not directly blame Iran for the attack. But he denounced Iran in a statement Monday praising the writer's support for freedom of expression and religion.

Fatwas can be cancelled. But Iran's current supreme leader, Ayatollah Ali Khamenei, who took over after Khomeini's death, has never done so.

stab — v. to wound someone with a pointed weapon like a knife

blasphemous — adj. something greatly disrespectful of God or something held holy

reproach — n. an expression of disapproval

bail — n. an amount of money given to a court to permit an accused person to leave prison before his trail