Update Required To play the media you will need to either update your browser to a recent version or update your Flash plugin.
By Mario Ritter
17 May, 2017


Iranians will cast their ballots for president on Friday.

He has gained support from conservative Iranians who are dissatisfied with the leadership of Rouhani. They have criticized him for wanting to open up Iran to Western values and for not doing enough to help the poor.

The Iranian election is on the same day that U.S. President Donald Trump begins a nine-day international trip — his first in office. Trump will arrive in the Kingdom of Saudi Arabia Friday.

The move is seen as an effort to reinforce U.S. relations with Middle East allies, as it leads a coalition against the Islamic State terror group in Syria and other countries. 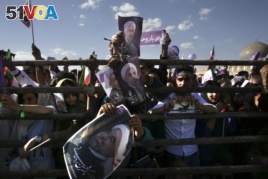 Supporters of Iranian President Hassan Rouhani in the May 19 presidential election attend his campaign rally, in Isfahan, Iran, Sunday, May 14, 2017.

Friday's vote is the first Iranian presidential election since the country reached a nuclear agreement with the U.S. and other world powers. The deal was reached in 2015 under former president Barack Obama.

Trump has been critical of the nuclear deal.

In the agreement, Iran agreed to place limits on its nuclear enrichment program. In return, Western countries reduced some economic restrictions on Iran, including permitting oil exports to Europe and the releasing of billions of dollars.

Rouhani was one of Iran's main nuclear negotiators before becoming president. He is closely linked to the nuclear deal.

Many Iranians, however have not felt the economic effects of that agreement. Supporters of Raisi say Rouhani has failed to reduce poverty. They have proposed providing new monthly unemployment payments and public works projects to create jobs.

Iran's Supreme Leader Ayatollah Ali Khamenei has not officially endorsed Raisi. But he has been critical of Rouhani's efforts as president.

In a video released in March, Khamenei said, "I am aware of the people's situation; therefore, I can sense the bitterness of the people, especially the lower classes, from economic problems such as inflation, unemployment, discrimination, equality and social harms."

Raisi's candidacy received additional help Monday, with the withdrawal of Muhammad Bager Qalibaf. He is the mayor of Iran's capital Tehran.

Qalibaf gave his support to Raisi. The two campaigned together on Monday.

However, no Iranian president has lost a reelection since the 1979 Islamic Revolution brought Iran's religious rulers to power.

Rouhani is often described as a moderate. He was a close ally of reformer Ali Akbar Hashemi Rafsanjani.

Raisi currently serves as the head of the Imam Reza charity foundation, a large group of businesses and investment funds.

Sanam Vakil, is an expert with the international affairs group Chatham House. She says the election may say a lot about Iran's future.

"A Rouhani victory would signal popular support for his policies of economic and political integration as well as moderation," she said.

But she added that a win by Raisi could bring about a "more confrontational approach to domestic and regional policies."

Six candidates were approved for this year's presidential election. Among those not approved was former conservative president Mahmoud Ahmadinejad.

Four candidates remain in the race. If no candidate receives a majority of the vote Friday, the top two vote-getters will face each other in another election.

integration – n. to bring someone into a larger group