American businesses have begun to explore how they can sell their goods and services in Iran. For many years, restrictions on trade have stopped many companies from doing business in the country. The United States government was a major supporter of economic sanctions against Iran. The sanctions were meant to punish Iran for ignoring United Nations resolutions on its nuclear activities.

But those restrictions may soon change. This month, Iran signed an agreement with world powers to limit its nuclear program. The deal calls for the international community to lift the sanctions.

The agreement sets limits on Iran's nuclear development for 10 years. In exchange, the international community will end sanctions and trade limits, which have hurt Iran's economy. But experts say Iran has much to do before foreign businesses invest in the country and sell their products there. 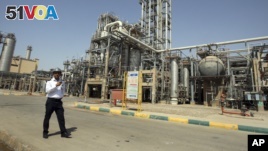 FILE - In this 2011 file photo, an Iranian security guard stands at the Maroun Petrochemical plant at the Imam Khomeini port, southwestern Iran. U.S. companies are interested in developing markets in Iran.

Suzanne Dimaggio is director of the Iran Initiative at New America, a public policy group. She says the country has 80 million highly-educated consumers who want to buy products and services from U.S. companies. But she says it will take some time for large American companies to, in her words, "feel comfortable enough to start investing in Iran."

"They'll need to see that Iran is working through this agreement, is complying with it. They also will want to see that there is some stability there."

Iran has some of the largest oil and natural gas reserves in the world. But economic sanctions have limited the country's ability to fully-develop those reserves.

"But make no mistake about it, Iran will be a major player in the oil sector. I think this has other countries like Saudi Arabia worried -- what will that do to the market that is already so far down."

Paul Wachtel teaches economics at New York University. He notes that the sanctions will not be cancelled immediately. But he says when they are, the global economy will benefit.

VOA's Bernard Shusman reported on this story from New York. Christopher Jones-Cruise adapted it for Learning English. George Grow was the editor.

sanction(s) – n. an order that is given to force a country to obey international laws by limiting or stopping trade with that country

comply – v. to obey; to do what you have been told to do

reserve(s) – n. a supply of something that is stored so that it can be used at a later time

Will businesses in your country benefit from the agreement with Iran? We want to hear from you. Write your thoughts in the comments section.