After Prisoner Exchange with Iran, US Imposes Limited Sanctions


A day after lifting economic sanctions against Iran for meeting the terms of the nuclear agreement, the U.S. announced new, limited sanctions against several Iranian citizens and companies for helping Iran's ballistic missile program.

The new sanctions were announced shortly after a plane carrying Washington Post reporter Jason Rezaian and two other American citizens, freed in a prisoner exchange, arrived in Switzerland.

On Saturday, the U.S. released or dropped charges against seven Iranians either convicted or accused of helping Iran avoid the longstanding sanctions in exchange for Iran's release of five Americans. 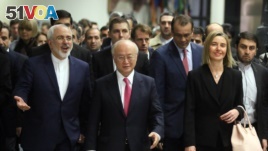 The exchange came after the United Nations nuclear agency confirmed that Iran had met the conditions of an agreement it signed last July after two years of negotiations to limit its nuclear activities.

Under the agreement, Iran moved almost all of its nuclear fuel out of the country, destroyed and removed its nuclear equipment and gave international inspectors greater access to its nuclear facilities.

Shortly after the announcement that Iran had met the terms of the agreement, the United States and other world powers lifted oil and economic sanctions. They had severely damaged the Iranian economy.

On Sunday, President Barack Obama said that "strong American diplomacy" led to the end of sanctions and the release of American prisoners held by Iran. 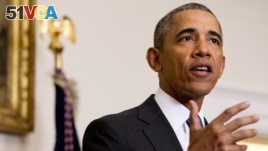 President Barack Obama speaks about the release of Americans by Iran, Jan. 17, 2016, in the Cabinet Room of the White House in Washington.

The president said last year's nuclear agreement "was never intended to resolve all of our differences with Iran. We will continue to enforce these (new) sanctions vigorously. We are going to remain vigilant about it."

Earlier on Sunday, Iranian President Hassan Rouhani said in a speech to the Iranian people that the country had entered a "new chapter" in its history.

Israeli Prime Minister Benjamin Netanyahu has opposed the nuclear agreement since it was announced. Saturday, after the UN said Iran had met the terms of the agreement, he warned that Iran has not ended "its ambition to obtain nuclear weapons, and continues to act to destabilize the Middle East and spread terror throughout the world."

Many of President Obama's political opponents also criticized the end of the sanctions.

VOA News reported this story from Washington. Christopher Jones-Cruise adapted it for VOA Learning English. Hai Do was the editor.

sanction – n. an action that is taken or an order that is given to force a country to obey international laws by limiting or stopping trade with that country, by not allowing economic aid for that country, etc. (usually plural)

condition – n. something that you must do or accept in order for something to happen

access – n. permission or the right to enter, get near, or make use of something or to have contact with someone (usually + to)