Update Required To play the media you will need to either update your browser to a recent version or update your Flash plugin.
By VOA
01 June, 2012

The next international talks on Iran's nuclear program take place this month in Moscow. The talks come as Russia continues to oppose missile-defense plans designed to answer a possible nuclear threat from Iran.

The United States and the European Union believe that a goal of Iran's uranium enrichment program is to possess nuclear weapons. The Iranian government says it only wants to use its enriched uranium for peaceful purposes, such as producing electricity. 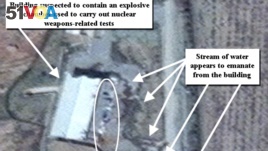 This April 9, 2012 photo provided by the Institute for Science and International Security, ISIS shows suspected cleanup activities at a building alleged to be used for nuclear weapon related tests in the Parchin military center.
Talks between Iran and six world powers have gone on for years. The six countries are the United States, Britain, China, France, Germany and Russia.

The latest two-day meeting took place in Baghdad last month. There was very little progress. Negotiators agreed to meet in Moscow in the middle of June.

The common thinking is that Russian economic interests in Iran have led Russia to be a strong supporter of Iran. But many experts say Russia has taken a stronger position on Iran during the past few years.

Robert Legvold of Columbia University says one reason was what American officials have called the reset in relations with Russia. Mr. Legvold says that does not mean there are no disagreements between the United States and Russia over Iran. He says the possibility of some kind of military attack on Iran makes the Russians nervous.

ROBERT LEGVOLD: "And the Russians are very antsy about the idea of a military option, whether it's Israel that executes it or whether it is some kind of a U.S. option, or the U.S. with Israel together. They also continue to push much harder on the diplomatic option rather than further tightening of sanctions."

But Russia has voted in the past for economic sanctions against Iran in the United Nations. And Stephen Cohen, professor emeritus at Princeton University and New York University, says that is not all Russia has done.

STEPHEN COHEN: "Russia cancelled a deal it had with the Iranian government to supply it with anti-aircraft missiles, the kind of anti-aircraft missiles that Iran would need to defend itself if it was attacked by Israel or the United States, which remains, by the way, on at least the theoretical agenda. These were enormous concessions by Moscow."

Experts say one area where Russia will not compromise is missile defense. This American-led idea is tied to the possible nuclear threat from Iran. The Obama administration has proposed deployment of anti-missile interceptors on navy ships at sea. There also would be land-based versions of these anti-missile missiles. Some would be sent to former Warsaw Pact countries in Eastern Europe.

Russia has always opposed American plans for a missile defense system in Europe. Russian officials see it as aimed against Russia. Robert Legvold at Columbia University says Russia's main objection is tied to the last part of the missile defense plan. That part, known as Phase Four, is set for deployment in twenty-twenty.

ROBERT LEGVOLD: "The problem with Phase Four -- and we begin moving that way with Phase Three -- is that that is an intercontinental ballistic missile system designed to defend the entire continent, not merely what's called theater systems, which is what the shorter-range systems are. And those, theoretically, depending on where they are deployed, could be something of a threat to the Russian nuclear deterrent."

NATO leaders restated their support for the missile defense plan when they met last month in Chicago. And that's IN THE NEWS in VOA Special English. I'm Steve Ember.