Update Required To play the media you will need to either update your browser to a recent version or update your Flash plugin.
By Jim Dresbach
19 April, 2016


The president of Iran promised to defend Muslim countries against terrorism and Israel, in a national speech on Sunday.

President Hassan Rouhani made the speech during a National Army Day parade. Rouhani also said Iran's neighbors should not feel threatened by a show of military power.

Rouhani offered aid to other Islamic countries and said its military power is for defense. 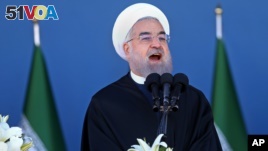 "If tomorrow your capitals face danger from terrorism or Zionism, the power that will give you a positive answer is the Islamic Republic of Iran," he said.

Zionism is political support for the creation and development of a Jewish homeland in Israel.

Rouhani praised fellow Iranians who are helping in Syria and Iraq to fight Islamic State terrorists.

Since its revolution in the late 1970s, Iran has had conflicts with its neighbors. They fought Iraq for nearly eight years starting in 1980. Saudi Arabia has been Iran's recent rival. The two countries support opposite sides in the Syrian and Yemeni civil wars.

The Associated Press contributed to this article. Jim Dresbach adapted this story for Learning English and VOANews.com. Kathleen Struck was the editor.

Zionism – n. political support for the creation and development of a Jewish homeland in Israel