Update Required To play the media you will need to either update your browser to a recent version or update your Flash plugin.
By George Grow
16 November, 2014


The United Nations says Iraq and Syria need more aid to deal with the huge humanitarian crisis in the area.

Millions of people in Syria and Iraq need humanitarian aid. Many of these men, women and children fled violence with only the clothes they were wearing.

The United Nations is calling the situation in Syria and Iraq the biggest humanitarian crisis in the world today. Baroness Emma Nicholson is with the AMAR International Charitable Foundation. She says donors are not reacting to appeals for more donations. 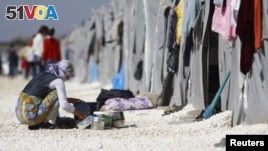 The United Nations says Iraq, Syria face a chronic shortage of aid funding despite the massive scale of the humanitarian crisis in the region.

"For a reason I cannot understand, I cannot explain, the world has barely shifted in its response. The big funders haven't come across, yet there are 1.4 million new refugees, IDPs (internally displaced persons) inside Iraq alone. And you know what's going on in Syria. And this is spreading.

Joel Charny is with InterAction, an alliance of more than 180 non-governmental organizations.

"I think part of it is that there are so many emergencies right now."

He adds that donors may be facing difficult decisions about where to send their money.

Some countries have donated large amounts. Since 2012, the United States has provided more than $1.5 billion to help Iraqis and Syrians. Saudi Arabia recently gave the United Nations $500 million. But Joel Charny says more than just money is needed to ease the crisis.

"Yes, if we had more aid, we could provide more services. But let's face it. Fundamentally, this is a crisis that can only be solved diplomatically, and the whole diplomatic process has ground to a halt."

As winter starts to arrive, humanitarian groups are exploring ways to raise interest in the general public so people will donate more. But the groups say they have not yet succeeded.

*This report was based on a story from VOA's Ayesha Tanzeem. George Grow wrote this story for VOA Learning English. Kelly Jean Kelly was the editor.

crisis - n. an extremely important time when something may become much worse or better; a dangerous situation

winter - n. the coldest time of year, between autumn and spring

violence - n. the use of force to cause injury, death or damage