Iraqi military officials said they took back the city of Ramadi from Islamic State militants.

On Monday, Iraqi forces raised the national flag over the city's main government office. They swept the streets, searching for explosives and booby traps. The IS fighters could have put these in place before being ousted from the city.

IS militants had captured this capital of Anbar province in May. 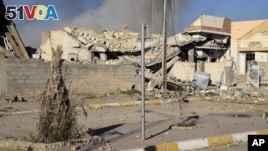 Iraqi forces said small groups of jihadists may remain. But officials said troops have not faced resistance since jihadists fled Sunday. There have been no reliable reports of how many people were killed or wounded.

It is not clear how many civilians remain in central Ramadi. It is 115 kilometers, or 70 miles west of Baghdad. An Iraqi spokesman said most residents had taken shelter at a nearby hospital.

The Iraqi military prepared for months to take back Ramadi. They were backed by U.S.–led coalition air strikes. The Iraqi forces pushed into the center of Ramadi last week in an effort to secure the city.

The U.S. military said it carried out at least 29 air strikes on IS targets in the past week. More targets were hit Sunday.

Officials said air strikes Saturday targeted vehicles operated by IS fighters and a factory used to make suicide bombs for use on vehicles. Sniper positions were also hit.

explosive – n. a substance (such as dynamite) that is used to cause an explosion : an explosive substance

booby trap – noun phrase a hidden bomb that explodes when the object connected to it is touched, moved, etc.

jihadist – n. someone engaged in a war fought by Muslims to defend or spread their beliefs

airstrike – n. an attack in which military airplanes drop bombs

sniper – n. a person who shoots at another person from a hidden place