Update Required To play the media you will need to either update your browser to a recent version or update your Flash plugin.
By Christopher Jones-Cruise
01 May, 2016


Baghdad is in a state of emergency after protestors led by Shi'ite clergyman Muqtada al-Sadr entered the parliament building in the International Zone Saturday, forcing lawmakers to flee.

On Sunday morning, the demonstrators gathered in front of the now-empty parliament building and in what is known as the zone's "Celebration Square." Later, they announced they would temporarily leave the area. In a statement, Sadr's office said the decision was made because a major Shi'ite religious observance is taking place.

About 60 lawmakers -- most of them from the minority Kurdish and Sunni parties -- flew out of the capital to Irbil and Suleymania, in the northern, self-governing Kurdish part of the country. 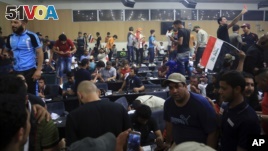 "It was dangerous for all of us," one parliament official told VOA. He said some lawmakers were beaten.

Usually, only people with special documents are permitted to enter the secure area, which is also known as the Green Zone. A United Nations office and many foreign embassies are in the zone.

The parliament official said "at any time, the protesters could attack any embassy, any institution they want, or abuse anybody passing by. It seems al-Sadr wants to keep them inside the (zone) so he can force the government to do what he wants."

The protest took place after weeks of political disputes and increasing instability. Many Iraqis are angry with the government. They want better government services and security and they want corruption to end.

The parliament official said "al-Sadr has the power of the people. One speech and he can deliver thousands of people to do what he wants. It is the power of the populace. Al-Sadr is capable of running and leading the anger within each Iraqi person."

Iraqi security forces have stopped anyone from entering the city, and the military is watching closely to see what happens next.

Correspondent Sharon Behn reported this story from Irbil, Iraq. Christopher Jones-Cruise adapted it for VOA Learning English. Hai Do was the editor.