Update Required To play the media you will need to either update your browser to a recent version or update your Flash plugin.
By VOA
12 July, 2014

In Turkey, many people are concerned about the economic effects of unrest across the border in Iraq. The country is Turkey's second largest trading partner. Turkish companies export about $14 billion a year to Iraq.

Recently, the militant Islamist group ISIL made major military gains in Iraq. Now experts are debating the effect on the Turkish economy.

Sinan Ulgen is a visiting scholar for the Carnegie Institute in Brussels.

But observers say the effects on Turkish exports to Iraq could have been worse. That is because around 75 percent of those exports are to the relatively secure Iraqi Kurdish area. It has largely escaped the militant group's offensive. 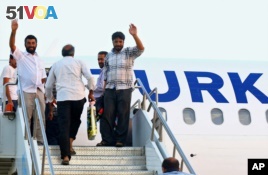 Turkish truck drivers captured earlier by militants in northern Iraq at an airport in Irbil, Iraq, July 3, 2014.
However, Turkish trade that passes through Iraq to the wealthy Gulf markets is a different issue. Atilla Yesilada works for Global Source Partners, which a business specializing in developing economies. He says the Iraq crisis comes at a time of rising diplomatic tensions between Egypt and Turkey.

"The Egyptian authorities have started causing troubles for our trucks and ferries. [About] 30,000 lorries, trucks, had been traveling to Iraq before the crisis and now that the number has dropped to say 5,000."

Turkish economic problems could worsen as the ISIL continues to threaten security in the area.

Another concern, warns Mr. Yesilada, is rising oil prices. He says the rising prices could bring inflationary pressure, in the near to medium term, for energy importer Turkey.

"[It] could expand over time. The most obvious example is the price of oil. Every $10 jump in Brent oil adds $4 billion to our energy deficit."

Sinan Ulgen says that situation is likely to depend on whether the threat of ISIL can be contained. He says if the situation in Iraq gets worse, so will Turkey's economy.

"The most important, whether, if, the situation continues to worsen, then Turkey's [international] risk perception can be affected, which will raise the cost of capital for Turkey and Turkish companies, that will be even more crucial for the Turkish economy."

Observers note that strong economic growth marked the first 10 years of rule under the AK Party of Prime Minister Recep Tayyip Erdogan. But growth in the past few years has slowed.

Prime Minister Erdogan now is campaigning for the presidency. The presidential elections are to take place in August, with general elections set for June 2015. Observers say keeping the economy growing could prove to be Mr. Erdogan's greatest test.

*This report was adapted from a story by Dorian Jones in Istanbul.