Update Required To play the media you will need to either update your browser to a recent version or update your Flash plugin.
By Dan Friedell
29 March 2021


The main library at Mosul University in Iraq opened in 1921. After a donation from 60 of the city's libraries in 1967, its collection grew to nearly 1 million books.

The library had books on subjects such as literature, science, philosophy, law, culture and contained old maps, writings and newspapers. Over time, it became the university's research center, and 1,500 students would visit each day.

But that changed when the Islamic State (IS) took over Mosul in June 2014. The militant group forced its way into the library and started breaking equipment and burning books.

In early 2015, IS loaded about 8,000 books onto trucks, took them outside of the city and set them on fire. The director general of UNESCO, the United Nations' cultural organization, called this a "cleansing," and a "systematic destruction of heritage."

While many books were destroyed, the building itself remained largely undamaged until a nine-month-long battle started in late 2016. By the time the Iraqi military pushed IS from Mosul, thousands of people had died. Many people fled the fighting and thousands of buildings were destroyed – including the library. It was burned by IS and hit by missiles aimed at ousting the group. 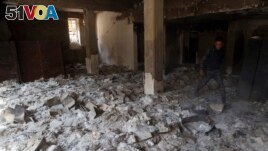 The remains of burned ancient books and manuscripts are seen inside Mosul's heavily damaged museum, March 8, 2017.

Tahany Saleh was an economics student at the university in 2014. When the fighting started, she stayed home for almost 1,000 days. She is now 28 and working to rebuild the library.

She remembers seeing thick, black smoke coming from the building. She said the fire looked "mad" and she could see the smoke although her home is a long way from the library.

Mohammed Jasim al-Hamdany used to oversee the library. He said he saw pictures of the destroyed building on television. At the time, he left Mosul to get away from the fighting. He said he did not think the library would survive the damage, so he started a new library for students at Kirkuk University.

After the fighting ended, almost 95 percent of Mosul University's library collection was lost. Al-Hamdany said many of the items can never be replaced.

In January 2017, Iraqi forces re-took the part of Mosul that includes the university. Saleh thought she might be able to go back to school. But without the library, she wondered, where would she study?

"My university was destroyed," she said.

While she could not stop the destruction that happened years earlier, she realized she could work to rebuild the library.

She got help from her friend, Omar Mohammed. He ran a blog called Mosul Eye. The two worked to call attention to the destroyed library and used Twitter to ask people to help.

Mohammed tweeted: "Our Central Library is liberated, but burned to ashes. Are you willing to donate books to it?" 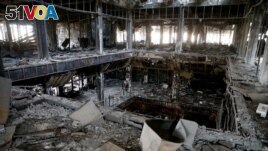 General view of the library of the University of Mosul burned and destroyed during the battle with Islamic State militants, in Mosul, Iraq January 30, 2017.

Some people offered help, but others said there were still books inside the library that had not burned. Could they be saved?

After some time passed, Saleh went to the library with some friends. It was dark, cold and dangerous. They were worried about mines and unexploded devices that might go off.

Once inside, she and her friends discovered an area that held old newspapers. They had survived.

Mohammed wrote about Saleh's discovery on his blog.

He asked people to come help recover the books and newspapers from the library and bring them to a safe place. About 20 people came and worked in the hot weather for 40 days. Nearby, in western Mosul, they could still hear fighting.

It was hard work – and dangerous. One day the Iraqi military told the volunteers to leave. They thought IS might target them.

Saleh said about 10 minutes after they left the area, three rockets landed nearby. It was loud. People were worried. But they still came back the next day to save the books.

Saleh said the volunteers joked that IS "can't hurt us." She said the work provided a sense of hope.

After some time, all of the people working together became friends. They started socializing and playing soccer against each other – both men and women. In Iraq, men and women do not usually spend much time together having fun.

Videos of their games and the good times they were having spread on social media sites.

More people wanted to help the group save the books and do even more work to help Mosul recover.

Then, the group held a book donation event. About 4,000 people came and brought books for the library. People played music and enjoyed the event. Saleh said it was the first time people had ever played music at the university.

They started some new traditions that day. It was a celebration of life. They said, "We want to live. The war has ended, and we have decided to live."

Over time, more and more people brought books to the library. Now there are about 60,000.

The building itself is still standing but it needs major repair work. The Iraqi government is trying to find money for the repairs, but the project is not currently making progress.

For now, the books are safe. They are on shelves at the university's Education College.

What do you think about the students working to save the Mosul University library? We want to hear from you. Tell us in the Comments Section and visit 51VOA.COM.

heritage –n. the traditions, achievements, beliefs, etc., that are part of the history of a group or nation

blog –n. a Web site on which someone writes about personal opinions, activities, and experiences

liberate –v. to free (someone or something) from being controlled by another person, group, etc.

ash –n. the soft gray powder that remains after something (such as a cigarette or wood) has been completely burned and destroyed by fire

shelf (shelves) –n. a flat surface that can hold book or other objects