Is a Worm the Next Invasive Threat?

Update Required To play the media you will need to either update your browser to a recent version or update your Flash plugin.
By Gregory Stachel
23 October 2022


Just as North Americans became used seeing the lanternfly insect, there is another invasive animal population on the rise: the Asian jumping worm.

Its scientific name is Amynthas agrestis. But it is also known as "Alabama jumper," "Jersey wriggler," and "crazy worm." Unlike other usual North American earthworms, these highly active worms eat large amounts of humus.

Humus is the rich, organic, and important top part of soil. It is critical to many ecosystems. All kinds of soil life need humus. 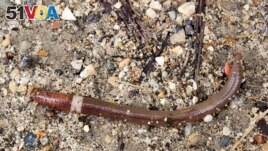 Plants and other soil life cannot survive without humus. It is also, however, a favorite food of the Asian jumping worm. And the insects "can eat all of it," wrote Susan Farmer of the United States Forest Service in a report published in May.

A decrease in humus would also threaten birds and other animals that depend on insects that live in soil for food.

The worms are native to east-central Asia. They are believed to have been introduced to the United States in the late 1800s, likely arriving in transported plants. Their existence went largely unnoticed – or possibly underreported. But in the past ten years, scientists started to describe the Asian jumping worm as a problem, says Dr. Timothy McCay. He is a biology and environment professor at Colgate University in Hamilton, New York.

Asian jumping worm populations are confirmed to be in 35 states across the U.S.

Although its yearly life cycle ends in winter, the animal cocoons survive to produce a new generation in spring. McCay said their tiny eggs are nearly impossible to see in soil. But adult worms, which are about 8 to 20 centimeters long, are easy to see close to the surface.

As they eat their way through the soil, the worms leave behind two things: cocoons and castings, or waste. The cocoons are very small and soil-colored, so they are easy to miss. However, the castings have a coffee-ground look that will let you know they are present.

The shiny worm can be either gray or brown. A thick line of white or light gray circles part of its long body. When touched, the worms quickly move from side to side, jump, and they may even move back and forth like the reptile the snake. McCay said that behavior, along with their ability to reproduce without mating, helps the species out populate its predators.

McCay said predators like "Robins and other birds, shrews, garter snakes, and amphibians like toads may not be able to effectively suppress their populations."

McCay said "gardeners should do what they can to avoid spreading jumping worms to new areas." Because the worms usually move into forests from nearby gardens, he said, control in home and community gardens is necessary to slow their invasion into natural areas.

So during this season of plant dividing and changing plants, gardeners must pay attention. Look often for the worms' waste droppings. Look in the soil that stays on plant roots and in the ground surrounding them. In addition, McCay advises, do not place waste from infected gardens into nearby forests. Share only plants cleaned of soil only.

There are no good control measures available for established populations of jumping worms. But McCay said removing them by hand and dropping them into containers of vinegar will reduce their numbers. He knows of one gardener in Pennsylvania who removed 51,000 worms that way in 2021.

worm – n. a long, thin animal that has a soft body with no legs or bones and that often lives in the ground

cycle – n. a set of events or actions that happen again and again in the same order

cocoon – n. a covering usually made of silk which some insects (such as caterpillars) make around themselves to protect them while they grow

vinegar – n. a sour liquid that is used to flavor or preserve foods or to clean things