Is Email Stressing You Out?

Update Required To play the media you will need to either update your browser to a recent version or update your Flash plugin.
By Anna Matteo
21 March, 2016

Few people would disagree that email makes our lives easier. But misusing email can cause problems. And I'm not talking about hitting the "reply all" button when you didn't mean to.

Answering all those emails and processing all that information can overload the brain, causing stress. 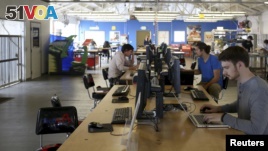 It is almost impossible to think of work without email. Here, people work at their computers at a technology company in San Francisco, California, April 2014. (REUTERS)

So says the Future Work Centre, a business based in London. This company carries out psychological research on people's experiences in their workplaces.

But back to the culture of emailing.

Emails provide a useful way to communicate. But they could add to tension in the mind, causing stress.

Come rain or shine, some office workers are under pressure to read and answer emails all day long.

Jonathan Rowe has an office job in London. His complaint is a common one: too many emails. He says reading work emails when you're at home blurs the boundaries between work and leisure.

"Just general day-to-day pressure to be available all the time, to answer emails all the time, to perhaps eat into people's leisure time and blur the boundaries between work and leisure..."

Psychologists are concerned about the pressure that workers bring on themselves. Dr. Richard MacKinnon spoke with VOA News on Skype.

He says that email can be a valuable, time-saving communication tool. But it can also be a source of stress and even anger for many of us.

He adds that the stress does not come from the number of emails you get. The problems result from when and how you deal with them.

According to the study, there are two very stressful email behaviors. One is leaving email on all day – and never signing off. The other is reading and answering emails early in the day and late at night.

"Checking your email very early in the morning, or checking it late at night, or leaving your email on all day, that has a much stronger relationship with email pressure. So it's not necessarily about how many emails we receive..."

Which jobs are most affected by email stress?

But not all jobs are equally stressed by email. The jobs most affected by email stress are:

Educational experts have also written several reports on how email overloads are stressing out teachers.

Ways to cut down on your email stress

The Future Work Centre report claims that in 2014, people sent an estimated 196.3 billion emails. The average adult spent more than an hour a day answering emails.

Email is certainly not going anywhere. So, it is important to control your emails and not the other way around.

VOA's Martin Secrest spoke with Dr. MacKinnon for this story. Anna Matteo adapted his report and added other information for Learning English.

stress – n. a state of mental tension and worry caused by day-to-day problems

cuts both ways – idiomatic expression to have a mixed effect.

eat into – idiomatic expression to use or take away a large part of something valuable, such as money or time

come rain or shine – idiomatic expression no matter whether it rains or the sun shines; in any sort of conditions

complaint – n. the act of saying or writing that you are unhappy or dissatisfied with something

blur – v. make or become unclear; often used in the expression to blur the boundaries between two things