Update Required To play the media you will need to either update your browser to a recent version or update your Flash plugin.
By Caty Weaver
12 August, 2015


An Egyptian group linked to Islamic State said Wednesday it executed a Croatian citizen it kidnapped last month. It made the statement in an online message. The group, called Sinai Province, also posted a photograph of what it said was the man's body.

The photo shows a man's severed head lying on his body with a knife driven into sand next to it. The black Islamic State flag is in the background.

Mr. Salopek had a wife and two children. He was working in Egypt for GCC Ardiseis, a French oil and gas geology company. He was kidnapped on July 22. 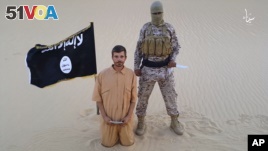 This image made from a militant video posted on a social media website Aug. 5, 2015, reportedly shows a militant and Croatian hostage Tomislav Salopek.

Since last year, the Islamic State has beheaded or executed more than 3,000 people, many of them civilians in Iraq and Syria. The victims also include reporters from around the world, a tourist and humanitarian workers.

The Sinai Province group said Mr. Salopek was killed because of his country's "participation in the war against Islamic State, after the deadline expired." The kidnappers had demanded that Egypt release Muslim women from its jails when they seized Mr. Salopek.

Next to the online photograph were images of Arabic language news reports. The reports included headlines such as "Croatia confirms its support for Egypt in efforts to fight terrorism and extremism."

When he was first kidnapped, Mr. Salopek was forced to read a statement saying he would be executed within 48 hours if Egypt did not release the female prisoners. The Islamic State had been demanding the releases for the past two years.

The Sinai Province is leading the Islamist insurgency in Egypt against the government of President Abdel Fattah al-Sisi. The militant group has killed hundreds of soldiers and police officers.

deadline – n. a date or time when something must be finished : the last day, hour, or minute that something will be accepted

expire – v. to end : to no longer be valid after a period of time

headline – n. the title written in large letters over a story in a newspaper

insurgency – n. a usually violent attempt to take control of a government : a rebellion or uprising