Update Required To play the media you will need to either update your browser to a recent version or update your Flash plugin.
By Christopher Jones-Cruise
05 January, 2016

The 10-minute-long video shows five men saying they filmed IS militants in Raqqa in northern Syria. Raqqa is the capital of the Islamic State group's self-declared caliphate.

The men kneeled on the ground. Five men wearing military clothing and masks stood behind them with guns.

One of the gunmen said the execution was "a message to David Cameron" -- the British prime minister. Cameron has ordered an increase in attacks on militants in Iraq and Syria. 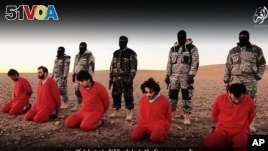 This undated image is taken from video posted online Jan. 3, 2016, by the Islamic State group. The group claims it shows its members executing five men they accuse of spying for Britain in Syria.

The five alleged spies were then shot in the head.

The British foreign office said it was examining the video.

VOANews reported this story from Washington. Christopher Jones-Cruise adapted it into VOA Learning English. Kathleen Struck was the editor.

spy – v. to try to secretly get information about a country, organization, etc.; to act as a spy

caliphate – n. a form of Islamic government led by a caliph -- a person considered a political and religious successor to the Islamic prophet Muhammad

mask – n. a covering designed to hide the face