Is the Ivory-Billed Woodpecker Extinct or Just Hiding?

Update Required To play the media you will need to either update your browser to a recent version or update your Flash plugin.
By Dan Friedell
17 July 2022


Is an animal or bird extinct if no one has seen it in almost 80 years? Or is it just good at hiding from those looking for it?

That is a question the U.S. Fish and Wildlife Service is trying to answer about a large bird called the ivory-billed woodpecker. 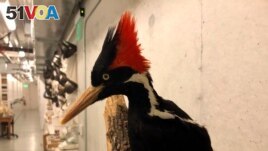 The woodpecker has been on the critically endangered list for a number of years. Right now, however, the Fish and Wildlife Service is trying to decide if it is no longer living. If it is considered extinct, it would no longer be protected by the U.S. government.

The bird is one of the largest woodpeckers. It once lived in the old forests in the southern U.S. However, the wood cutting industry destroyed the bird's habitat, or living place.

Some birdwatchers believe the birds still live deep in the remaining forests and swamps in the American south. Those places are hard to reach. And no one has seen the ivory-billed woodpecker in nearly 80 years.

Christian Cooper is an experienced birdwatcher. He called the woodpecker "something of a holy grail of North American birding."

"Even though it's almost 95 percent certain that it's gone, there's that slender chance that there's still a population, small population, hanging on to be found in some remote swampy forest in the south."

The bird was placed on a list of 23 species that may be extinct last September. But after many birdwatchers complained, the agency decided to delay its decision about the woodpecker from this September until March 2023.

But birdwatchers only have until August 7 to provide photographic evidence that the woodpeckers still live.

Cooper noted that a research group led by the National Aviary in Pittsburgh recently said it found evidence of the bird in Louisiana, using unmanned cameras and listening for its special call. The group would not say the area of the study because it hopes to keep the birds safe. The study has not been fully examined by other bird experts.

Ian Fischer is a spokesperson for U.S. Fish and Wildlife. He said there is a lot of "passion...for this bird ... but there has been no clear evidence that it lives, unfortunately."

The species on the proposed extinction list include: a fruit bat, 11 birds including the woodpecker, eight freshwater mussels, and two kinds of fish.

Cooper expressed a bit of hope that the mysterious bird may not be extinct.

"So, is the bird gone? Is the bird still around? No one can say for certain, but there's always hope."

Dan Friedell adapted this story for Learning English based on a report from Reuters and his own reporting.

swamp –n. land that is always wet and sometimes covered with water

holy grail – n. something you want very much but is very hard to get

remote –adj. far away or distant

species –n. a group of animals or plants that are similar