IS Mostly Ineffective, But Threat Is Rising in SE Asia

Update Required To play the media you will need to either update your browser to a recent version or update your Flash plugin.
By Christopher Jones-Cruise
24 July, 2016


The Islamic State terrorist group is not very effective in Southeast Asia right now. But, terrorism experts warn, the group could become stronger with more training and better leaders.

IS followers are spread throughout Indonesia, Malaysia and the southern Philippines. Experts say they have been influenced by IS leader Abu Bakar al Baghdadi's calls to carry out attacks.

IS followers are also reportedly motivated by the group's desire to control areas of Southeast Asia as part of its caliphate, even as the group loses territory in Syria and Iraq. 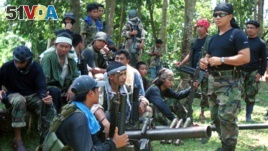 IS attacks in Southeast Asia

Police said the first IS attack in Malaysia took place in June this year. A grenade exploded outside a bar near Kuala Lumpur, injuring eight people.

And, in Indonesia this month, a suicide bombing was directed against police in the city of Solo. Only the bomber was killed.

Both attacks took place during the holy month of Ramadan. But little was reported about them because 350 people were killed at the same time in a series of attacks in several other countries, including the United States and Turkey.

The attacks in Malaysia and Indonesia were also not very effective. Experts point to the inexperience of the attackers, and to the strength of the security forces.

Badrul Hisham Ismail is an analyst with Iman Research, a Malaysian group that studies religion and society. He says the grenade attack in Malaysia was an example of the low level of ability of IS in the country. But he said it was also a sign of how the group is training to have a larger effect in the future.

"The threat level has risen because IS has shifted focus to build an Islamic state in this region," Ismail said.

Sidney Jones is the director of the Institute for Policy Analysis of Conflict. She also noted that the IS threat, while low, has increased across Southeast Asia. One reason is that IS supporters throughout the region are starting to connect with each other.

"We need to be open to the possibility that both the method and the professionalism of attacks could increase," Jones said.

IS recruitment in Southeast Asia has also become more aggressive.

For example, in May IS launched a website in the Malay language, which is understood throughout Malaysia and Indonesia.

Brigadier General Hamidin, who uses just one name, is the director of prevention at Indonesia's counter-terrorism agency.

Hamidin said that in the past, officials could monitor traditional recruitment methods, such as indoctrination at Islamic study groups. But now, Hamidin says, those methods have been replaced by instant messaging and social media, which are not easy to monitor.

IS has also attracted the support of existing networks of fighters in Southeast Asia.

And in the southern Philippines, a group best known for theft and kidnappings has also declared its allegiance to the Islamic State. The group, called Abu Sayyaf, now includes some Malaysian and Indonesian militants.

In fact, IS released a video in June showing an Indonesian, a Malaysian and a Filipino in Syria acknowledging an Abu Sayyaf leader as the head of IS in Southeast Asia.

Sidney Jones says it is possible that some Abu Sayyaf members could train terrorists in Indonesia how to make bombs.

Jones said, "One would think there would be some [thinking] among Indonesian leaders in Syria about how to be more effective. The only answers are training and leadership, and the question is where they will come from."

The Associated Press reported this story from Kuala Lumpur, Malaysia and Jakarta, Indonesia. Christopher Jones-Cruise adapted it for Learning English. Kelly Jean Kelly was the editor.

motivated – v. to give (someone) a reason for doing something

caliphate – n. a government under an Islamic ruler who is a successor a successor of Muhammad