Islam Is the Fastest Growing Religion in the World

Update Required To play the media you will need to either update your browser to a recent version or update your Flash plugin.
By Anne Ball
25 April, 2015


Islam is the fastest growing religion in the world, according to a new study. The Pew Research Center spent six years studying the demographics of population and religion around the world. What they found is that as the world population grows between 2010 and 2050, so will Islam.

Christianity and other religions will grow as well, but Islam will grow faster than any other major religion. The numbers of Buddhists are expected to remain the same or even drop a little.

What is behind this trend?

There are two major factors, fertility rates, how many babies each woman is having, and the number of young people. Islam tops other religions in both areas. 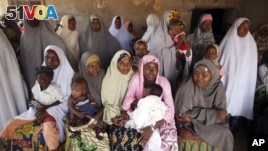 In this April 2011 file photo, Muslim women wait to cast their vote at a polling place in Daura, Nigeria. A new study projects that population growth in Africa is a factor in the growth of Islam.

Conrad Hackett was lead researcher for the Pew study. He says this is a story about Africa and its growing population.

"Africa is very important for understanding the change that's likely to happen in the decades ahead and a big reason for that is because Africa's population is very young... so a lot of people in Africa are entering the ages soon in which they will have children, and in Africa people have more children than in any other region. The average woman in Africa has nearly five children. And Africa is primarily composed of people who identify as Muslim or Christian."

Mr. Hackett says the sub-Saharan Africa population is expected to double between 2010 and 2050. By then, the United Nations estimates that there will be about two billion people living in Africa. That means one out of every five people would live on the continent.

As of 2010, Christianity was by far the largest religion in the world. Islam was second.

The Pew study predicts that if the current trends continue, by the year 2050, the number of Muslims will almost equal the number of Christians. Christianity will grow too, but not at the same rate. The study predicts that Christianity will increase from 2.17 billion to 2.92 billion. Muslims, however, will increase from 1.6 billion people in 2010 to 2.76 billion by 2050.

Mr. Hackett says the increase in numbers is not because many people are converting to Islam.

"That's really a very small part of the story that we can detect. The biggest driver of change in the size of the Muslim population will be the higher fertility that Muslims have and the youthfulness of their population."

While the number of Muslims in the U.S. will double, Mr. Hackett says the number will still be a small percentage, 2.1 percent.

"I think it's an interesting change, perhaps more symbolic than something that will have profound consequences in the U.S."

He adds that two out of three Americans will still claim Christian identity.

Indonesia has the largest Islamic population at this time, with over 200 million people calling themselves Muslim. But the Pew study expects India, a largely Hindu country, to exceed Indonesia by the middle of this century. There could be 311 million Muslims in India by then.

If all of these projections and trends hold true until the end on this century, Mr. Hackett says they anticipate that Muslims would eventually outnumber Christians before the year 2100.

"It's a striking finding because Christians have, as far as we can tell, always outnumbered Muslims, so we think that this is the first time in history that the Muslim population is larger than the Christian population, of course Christians had about six centuries of history before Islam began to gain a numerical advantage."

Professor John Farina teaches religious studies at George Mason University in the U.S. state of Virginia. He says he was not surprised that the Pew study found there would be a large growth in Islam and Christianity. "There is nothing surprising about the long-term trends that they highlight," he told VOA. "Religious people tend to be more family-oriented and have bigger families with more children."

Predicting the future is not an exact science. The study itself says that "many factors could alter these trajectories" and numbers. People could switch religions. Natural disasters, famines or wars can affect population.

Even Albert Einstein, the most famous scientist of our time said, "One need only think of the weather, in which case the prediction even for a few days ahead is impossible."

Anne Ball reported and wrote this story. Hai Do was the editor.

Islam - n. the religion which teaches that there is only one God and that God's prophet is Muhammad. It is the religion of Muslims

Muslim - n. a follower of Islam

Christianity - n. the religion that teaches that there is only one God and Jesus Christ was the son of God. It is the religion of Christians.

demographics - n. the qualities of a specific group of people, like age, sex and income.

trend - n. a way of behaving or proceeding that is developing and becoming more common. Change that is moving in a general direction.

exceed – v. to be greater or more than something

trajectory - n. often used figuratively to describe a path or a process of change or development that leads toward a particular result