Update Required To play the media you will need to either update your browser to a recent version or update your Flash plugin.
By George Grow
16 January, 2015


France is recovering from the terrorist attacks last week in Paris. Twelve people were shot and killed at the offices of the magazine Charlie Hebdo. Five others died in other attacks in and around the city. All three gunmen in the Paris attacks declared loyalty to Islamist groups. One such group, Al-Qaida in the Arabian Peninsula, claimed responsibility for the Charlie Hebdo shootings.

Most Muslims in France were quick to distance themselves from the violence. But some blame the government for not doing enough to help the country's disaffected minority youths.

France is a largely Catholic country. But in the late 19th century, the French Revolution created a different set of values: Liberty, Equality and Brotherhood. At the unity march in Paris last Sunday, those taking part repeated those values.

France's relatively new Muslim community has become a major test of that ideal. The government has a lot of work to do to correct the problems of poor, disaffected young men like the Paris gunmen. Susan Perry is with the American University in Paris. She spoke with VOA on Skype.

Pallbearers carry the casket of Charlie Hebdo cartoonist Bernard Verlhac, known as Tignous, decorated by friends and colleagues of the satirical newspaper Charlie Hebdo, at the city hall of Montreuil, outside east of Paris, Jan. 15, 2015. (AP Photo/Michel Euler)

"See, they've lived on the margins of society and there were no mechanisms in place to bring them in before it was too late. And so it's a government problem, but it's also a local community problem."

Parisians agree both the government and the Muslim community need to take action against Islamist militancy. On Thursday, French President Francois Hollande said the majority of Muslims are the main victims of religious extremists.

In his words, "Radical Islam fed itself with all the contradictions, influences, poverty, inequalities and conflicts unresolved for a long time. And it is the Muslims who are the first victims of fanaticism, fundamentalism and intolerance."

On a different continent, Boko Haram militants are fighting to establish their version of Islamic law in northeastern Nigeria. The group has claimed responsibility for numerous kidnappings and suicide bombings over the past five years. 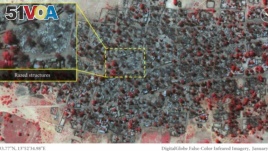 On Thursday, the group Amnesty International released satellite images of northeast Nigeria. The pictures show damage resulting from a Boko Haram attack on the fishing town of Baga last week. Local political leaders say hundreds of people were killed. The Nigerian military says about 150 people died in the attack.

Daniel Eyre is with Amnesty International.

"The satellite images that we have show that the attacks on Baga and surrounding towns were of an enormous scale. And the town next to Baga, that is Doron Baga, the, the satellite images show that more than 3,100 buildings were destroyed in the attack. That means almost the entire town was razed to the ground."

The pictures suggest that vehicles and boats were removed from the area.

"Many of the vehicles and boats that were there before the attack are now gone. So we, this is consistent with witness testimony that describes thousands of people fleeing to the safety of the capital of that state, Maiduguri, but also across Lake Chad to, to Chad. And the estimates that we have suggest that several thousand people fled the violence in Baga."

Boko Haram has killed thousands of Nigerians. But Daniel Eyre says the recent attack is one of the worst Amnesty has documented.

"This is the most severe destruction that we've seen by Boko Haram so far. The conflict has really escalated over the last 12 months. We've seen the group kill more than 4,000 civilians in 2014 alone. And in the last six months, they've taken over many towns like Baga in northeast Nigeria. And this appears to be not only the heaviest damage that we've seen so far, but also the, the highest number of people killed."

Many of those who fled the town remain missing.

loyalty - n. a feeling of strong friendship and support for someone or something

values - n. qualities of being useful, important or desired