Update Required To play the media you will need to either update your browser to a recent version or update your Flash plugin.
By George Grow
22 May, 2015


The self-declared Islamic State has captured two major cities in less than a week. Islamic State fighters took control of the ancient city of Palmyra in central Syria on Thursday. The fall of Palmyra reportedly left the group in control of half of Syria. It came just days after the militants seized the Iraqi city of Ramadi.

Palmyra is famous for its historic ruins. Some date back nearly 2,000 years to the time of the Roman Empire. The United Nations Educational, Scientific and Cultural Organization recognizes Palmyra as a World Heritage Site.

There were no immediate reports of damage to the ruins. But Islamic State militants destroyed a number of cultural treasures earlier in their offensive across Iraq and Syria. The militants claimed those artifacts violated Muslim beliefs. 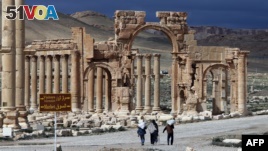 A picture taken on March 14, 2014 shows Syrian citizens walking in the ancient oasis city of Palmyra, 215 kilometres northeast of Damascus.

Maamoun Abdulkarim is Syria's antiquities director. He says hundreds of statues have been removed from Palmyra to safety. But other objects were too large and could not be moved.

"It is a huge loss to the history, to archeology. It pains me significantly, but more so, it's just aother symptom of this tragedy that's happening in Syria, and the loss of life, and the destruction of a country that really is, you know, one of the few places that indeed is a crossroads of history."

Mr. Lesch says the Syrian government has, up to now, been able to argue that it can only protect the Syrian people and cultural treasures. That, he says, may no longer be true. The fall of Palmyra marks the first time the Islamic State has seized a major city from Syrian government forces. Up until now, most of its military gains in Syria came as a result of victories over other militant groups.

In Britain, the Syrian Observatory for Human Rights said Thursday that the Islamic State now controls more than half of Syria. The group depends on activists inside the country for its information.

On Friday, the group said that armed militants of the al-Nusra Front had taken, in its words, complete control of a hospital near Jisr al-Shughour in Idlib province. The al-Nusra Front is linked to the terrorist group al-Qaida. Government soldiers had been taking shelter in the hospital since April.

The capture of Palmyra in Syria and Ramadi in Iraq raises questions about the effectiveness of American efforts to defeat the Islamic State. On Wednesday, President Barack Obama stated his support for Iraq's prime minister and the decision to plan an operation to retake Ramadi. His comments came as Iraqi government forces and Shi'ite militias surrounded the city for a possible attack.

Pat Ryder is a spokesman for the United States Central Command. He said on Wednesday that the Iraqis should be able to re-take Ramadi.

Colonel Ryder also said U.S.-trained Iraqi and Kurdish forces will help strengthen Iraq's security. He added that none of the troops trained by American soldiers were at Ramadi when it fell to the Islamic State group.

Some observers say the Islamic State gains show that the Obama administration needs a new plan of action to stop the militants. One administration critic is the Speaker of the House of Representatives, John Boehner. He says President Obama should send Congress a new Authorization of Military Force request to permit U.S.-led operations against the militants. He said the current request would actually give Mr. Obama less power than he already has to fight the Islamic State.

"This is why the president frankly should withdraw the authorization of use of military force and start over. We don't have a strategy."

But White House Press Secretary Josh Earnest rejected Mr. Boehner's comments. He said the president and administration officials had met repeatedly with lawmakers to negotiate the language of the request. He said the House Speaker is simply looking for reasons not to act.

This report was based on stories from VOA reporters Carla Babb, Luis Ramirez, Cindy Seine, and Jamie Dettmer. George Grow wrote the report for Learning English. Mario Ritter was the editor.

Words In The News

Heritage Site – n. a place considered important because of its cultural treasures

artifacts – n. something made by a human being, often one of cultural or historical interest

antiquities – n. the ancient past; buildings or works of art from the past