Update Required To play the media you will need to either update your browser to a recent version or update your Flash plugin.
By Christopher Jones-Cruise
12 July, 2016


People claiming to represent the Islamic State have claimed responsibility for several deadly attacks in the past two weeks.

The attacks came shortly after Islamic State forces lost territory in both Iraq and Syria. They are evidence of the group's plans to remain the world's leading terror organization.

The Islamic State, or IS, has been linked to terror attacks in Bangladesh, Iraq, Saudi Arabia and Turkey. But it is not clear if they were ordered, supported or only inspired by the group's leadership.

Intelligence officials believe IS will use the attacks to show that its members are leading a powerful movement that cannot be stopped. 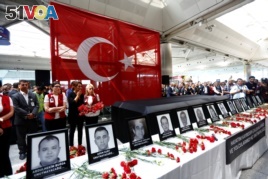 Airport employees attend a ceremony for their friends, who were killed in Tuesday's attack at the airport, at the international departure terminal of Ataturk airport in Istanbul, Turkey, June 30, 2016.

A United States anti-terrorism official spoke with VOA on the condition that the official not be identified. The official said the attacks show that groups like Islamic State are still dangerous. He said they have "the intent and capability to direct, support and inspire acts of violence."

The official said it is not yet clear whether IS militants carried out the latest terror attacks. But the official said the attacks show that governments around the world face "significant difficulty in stopping groups of determined, suicidal individuals."

Other U.S. officials note that the Islamic State has lost a lot of the territory it once controlled in Iraq and in Syria. Yet these officials say IS still has the ability to carry out and support terrorist attacks throughout the world.

The group can do this through the internet and social media. U.S. officials told a Senate committee this week that IS supporters are using the latest technology to spread their message and increase the group's membership.

Last month, the head of the Central Intelligence Agency, or CIA, met with the Senate Intelligence Committee. CIA Director John Brennan warned that American efforts had "not reduced the group's terrorism capability and global reach." He said the Islamic State was likely going to increase its attacks throughout the world.

Malcolm Nance is a former anti-terrorism and intelligence officer. He now leads a not-for-profit research center called the Terror Asymmetrics Project. He thinks the latest attacks were directed and organized by the main IS leadership.

Nance says those leaders will continue to seek out partners worldwide to help them carry out attacks. He says that will give the group the appearance of power at the same time it is losing control of territory in the Middle East.

"They have deep knowledge of the people and the places which would have the most impact if a terrorist attack was carried out," Nance says. "It's very important for them to keep the pressure on -- for people to believe that (IS) is a solid organization."

This way of thinking could make the militant group even more dangerous.

Daniel Pipes heads the Middle East Forum. He recently told VOA on Skype that "the brilliance of the Islamic State has been -- unlike al-Qaida and other groups -- not to get it wrong with logistics, funding (and) planning."

Pipes said this level of organization "makes it far easier for them to incite such violence and makes it far more difficult for security agencies to stop it. You can't stop the flow of money. You don't have chatter. You don't have all these mechanisms, these vulnerabilities."

In a video released on Tuesday, two Bangladeshi fighters in Syria praised the July 1st attack on a restaurant in the Bangladeshi capital, Dhaka. The attack killed more than 20. The two fighters said there would be more such attacks.

Some intelligence experts are asking how long the Islamic State can survive if the group has separated from its main territorial holdings in Iraq and Syria.

Jessica McFate is a former U.S. Army intelligence officer. She now works at the Institute for the Study of War. She says IS "at its core, is still, in my view, an Iraqi military organization that has an outsized global network. It's never going to cease to orient its entire worldview around Iraq."

McFate and others say that at least for a time, IS may be willing to inspire attacks whenever and wherever it can, rather than carry them out directly. It says the group's top leaders may hide and only keep a presence online until they feel they can safely re-group their membership.

Malcolm Nance says as the group "starts to lose its manpower and its central caliphate starts being destroyed -- which may happen in the next year -- it is going to devolve into what I call the ‘Ghost Caliphate' where they go completely covert and everything is done via the internet."

He says inspiring others to carry out attacks "is going to become the future. That is so dangerous, because no one can predict that."

inspire – adj. to make (someone) want to do something

chatter – n. casual talk that is usually not important or interesting; talk among groups or people planning an event

core – n. the central part of something

covert – adj. made, shown, or done in a way that is not easily seen or noticed; secret or hidden