Islamic State Is Said to Be Shrinking in Cyberspace

Update Required To play the media you will need to either update your browser to a recent version or update your Flash plugin.
By Christopher Jones-Cruise
23 July, 2016


The top American diplomat working to lessen the effect of terrorist messages says the Islamic State's recruiting efforts on the Internet have been slowed.

Richard Stengel, the Under Secretary of State for Public Diplomacy, says the news is not all good, though. The terrorist group's message continues to motivate angry and mentally unstable Muslims.

Stengel recently spoke to the Foreign Affairs Committee of the United States House of Representatives. His testimony was more positive than statements made by other American officials in recent weeks. 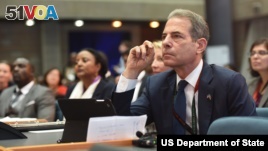 Under Secretary of State for Public Diplomacy Richard Stengel

"The virtual caliphate...is shrinking," he said. "Now we see the tide turning."

Stengel helps direct officials from several agencies that seek to tell people in other countries the truth about terrorists. The group has also worked with technology companies, Hollywood filmmakers and Muslims around the world to fight terrorist propaganda.

Stengel told the House committee that the Islamic State terrorist group's military losses are also beginning to affect their capabilities on the Internet.

"With our success on the military battlefield -- getting back almost 40 percent of the territory in Iraq that [IS] once held -- we are getting rid of a lot of those people who were creating [terrorist information on the Internet]," he said.

Stengel said the group's messages are not "taking nice, young Muslim boys and girls and turning them into foreign terrorist fighters." Instead, he said, the terrorists "are tapping into an already-existing market of grievance and unhappiness that [exists] throughout the Muslim world. They are sometimes pushing on an open door."

Republican Congressman Ed Royce of California is the chairman of the committee. He said the Islamic State's online messages are still effective.

IS "operates a vast network of online recruiters [and] online propagandists," Royce said. "They use popular media sites, and through that process [IS] can reach a global audience -- it does this within seconds."

Recently, Assistant FBI Director Michael Steinbach told a Senate committee that the Islamic State had increased the quality and quantity of its messages on the Internet.

"No matter the format, the message of radicalization spreads faster than we imagined just a few years ago," Steinbach said. "The most concerning trend that we've seen in the past year when we identify these individuals online is the speed with which they mobilize."

Democratic Congressman Eliot Engel said that pressure against the Islamic State must continue. He said, "We're connected on a global scale like never before. And so much good can come of that. But we know it cuts both ways. This incredible tool can also be used for incredible harm."

This story was reported by VOA Capitol Hill Correspondent Michael Bowman. It was adapted for Learning English by Christopher Jones-Cruise. Kelly Jean Kelly was the editor.

tap into – expression connect with

format – n. the form, design or arrangement of something

mobilize – v. to bring (people) together for action

scale – n. the size or level of something, especially in comparison to something else