Update Required To play the media you will need to either update your browser to a recent version or update your Flash plugin.
By Alice Bryant
30 November, 2016


The Islamic State terror group has called a man who attacked people with a car and a knife at Ohio State University a "soldier of the caliphate."

The group made the statement on the Amaq news agency website, which is linked to Islamic State, or IS.

Police say Abdul Razak Ali Artan carried out the attack, which injured eleven people, at the university in Columbus, Ohio Monday. Police then shot and killed him.

Artan was a refugee born in Somalia. He was a legal permanent resident of the United States studying business at Ohio State University. 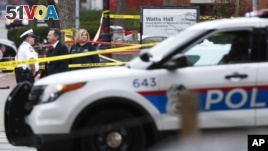 Police watch the area of an attack on campus at Ohio State Universit in Columbus, Ohio. Eleven people were injured. Police killed the attacker.

He posted a statement on the social media network Facebook shortly before the attack. In it, he blamed America for killing Muslims in other countries.

Officials are still investigating why Artan carried out the attack. But, in his statement, he said he was willing to kill, those he called, "infidels" to stop America from "interfering with other countries."

Columbus Police Chief Kim Jacobs said terrorism is a possibility in the attack.

Artan drove a car into a group of people near the street. He then got out of the car and began stabbing people with a knife.

Jacobs said, because Artan drove onto the sidewalk, police believe the attack may have been planned.

Leaders of the Muslim and Somali communities in Columbus condemned the attack. They said they were "heartbroken" by it.

Hassan Ali Omar, Chairman of the Somali Community Association of Ohio, told VOA the Somalis he spoke to were distressed to learn Artan was a Somali refugee.

"Some women told me they felt sick, they were heartbroken, they were shocked because they feel they have had enough troubles already," he said.

Omar was one of the community elders who visited Artan's family. He said he met his mother and siblings and they told him they are feeling, "at a loss and a lot of pain."

"They said he was (a) hard-working person who loved education. They said their son had good culture and that they were not expecting that he would do this kind of act," he said.

There are nearly 60,000 students at Ohio State University's main campus. The people injured in the attack include both employees and students.

Mohamud, a naturalized U.S. citizen from Somalia, was charged with providing material support to terrorists.

Columbus has one of the largest Somali communities in the United States.

caliphate – n. an area that is supervised by an Islamic leader

cleric – n. a member of the clergy in any religion

infidel – n. a person who does not believe in a religion that someone considers the true religion

campus – n. the area of and around a university, college, school

elders – n. a person who is older