Islamic Terrorists Are Changing Their Methods

Update Required To play the media you will need to either update your browser to a recent version or update your Flash plugin.
By Christopher Cruise
18 January, 2015


The terrorist attack at the French magazine Charlie Hebdo happened even though U.S. and French officials had tried for years to weaken Islamic extremist groups. The United States and its allies have taken a number of steps aimed at stopping extremists from carrying out terrorist acts.

VOA recently spoke with terrorism experts about the difficulty of fighting terrorist threats. These experts told us that the recent attacks in France and a failed plot in Washington are evidence of a change in thinking about terrorist attacks. They said attackers are no longer receiving direct commands from extremist Islamic groups. Instead, the attackers are increasingly creating their own small groups to plan and carry out attacks.

Scott Stewart is vice president of tactical analysis for Stratfor, a private intelligence service. He told VOA the attackers are following calls from militant groups to carry out raids on their own. 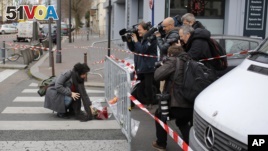 Watched by the media a woman lays a flower tribute at the site of the attack on a kosher market in Paris, France, Saturday, Jan. 10, 2015. (AP Photo/Laurent Cipriani)

"The idea is to shift it so that you can't just monitor, you know, one organization and their communications and then track down, you know, all the operatives. The idea is to make kind of this diffuse, amorphous network that can then conduct the attack without having direct links that the intelligence agencies can, you know, focus on."

Al-Qaida in Yemen has claimed responsibility for the Charlie Hebdo killings. The group says the attack was planned by one of its members -- Anwar al-Awlaki -- and carried out by Said and Cherif Kouachi. Officials in the US and Yemen believe Said Kouachi may have trained in Yemen. But they are not sure that he and his brother got a lot of support from Al-Qaida. They say the group may have provided only spiritual guidance and target information to the men.

Anwar Al-Awlaki was killed in a drone attack in Yemen in September 2011. Before he died, he had identified the French publication and its editor as targets.

Officials say Mr. Cornell did not believe he would get orders from overseas to carry out an attack in the United States. But they say the Ohio man told them he wanted to go forward with the raid. The FBI had been watching him for at least six months.

Karen Greenburg is the director of the Center on National Security at Fordham Law School in New York. She says attempting to find individual terrorists is not easy. And she says strikes by unmanned aircraft may not be effective.

"If what AQAP (al-Qaida in the Arabian Peninsula) and/or ISIS have become are, are monikers of, of people who self-radicalize or are helped along by people within (a) country, then I'm not so sure cutting off the head -- which used to be the way – you'd say, you know, ‘Cut off the head of the organization and you kill the organization,' is going to help in any way, because this, this is the narrative that is driving this, more than an individual or a hierarchical structure."

Scott Stewart says individual terrorists may be harder to find, but they are also not as good at planning an attack as a larger group might be.

French intelligence agents had been watching the Kouachi brothers and a third attacker for several years before they launched the Paris attacks. Ms. Greenberg says the problem is not a lack of intelligence information. She says officials need to use the information they have in more effective ways.

shift it – v. / idiom – make a change in operations

operative – n. a person who does secret work for a government or political organization

diffuse – adj. spread out over a large space; not concentrated in one area

amorphous – adj. having no definite or clear shape or form

conduct – v. to plan and do (something, such as an activity)

focus on – v. to cause (something, such as attention) to be directed at something specific

effective – adj. producing a result that is wanted; having an intended effect

moniker – n. a name or nickname

self-radicalize – v. to become radicalized without the help of a person or organization

cutting off the head – v. / idiom to eliminate the leader of a group or organization

narrative – n. a story that is told or written; information that is being used to influence or persuade

hierarchical – adj. description of a system in which people or things are placed in a series of levels with different importance or status

Do Islamic terrorists threaten peace in your country? If so, how are government officials answering the threat? We want to hear from you. Write to us in the comments section.