Islamist Extremism in America: Is Religion the Problem?

Update Required To play the media you will need to either update your browser to a recent version or update your Flash plugin.
By Christopher Jones-Cruise
22 June, 2016


Note: This is the first article in a three-part VOA series about Islamist extremism in the United States.

The mass shooting in Orlando, Florida this month was the worst in modern American history: 49 people killed, and 53 more were injured. During the massacre, the shooter told an emergency telephone operator that he was faithful to the leader of the Islamic State.

The Orlando shooting is one of several recent attacks in the U.S. in which the killers say they support Islamic extremist thinking.

These violent events have made many people ask: Why is Islamic extremism attractive? And is Islam itself the problem?

Watching IS supporters in the US

The Center for Cyber and Homeland Security is one of many groups in the United States that studies extremism. One of their methods is to follow IS supporters on social media, such as Twitter. Researcher Audrey Alexander says social media makes the IS group seem real and powerful. 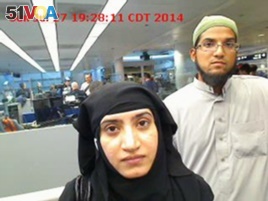 The Islamic State and its online messages have influenced a small but active number of supporters in the U.S. Last year, 56 people were arrested for taking actions to help the group.

Researchers do not know why these people support violent Islamic extremism. VOA spoke to terrorism experts who said IS supporters in the U.S. have little in common.

Of the 56 people who were arrested, 86 percent of them were male. Almost all were American citizens or legal permanent residents. They were between 15 and 47 years old.

Many were not even Muslims when they first became supporters of the group.

Lorenzo Vidino was one of the researchers. He says those arrested had "all kinds of backgrounds."

IS supporters have one thing in common, however.

Anne Speckhard is a research psychologist. She is the director of the International Center for the Study of Violent Extremism in Washington, DC.

She says people who are likely to find IS attractive are off track. In other words, they are failing in their lives somehow.

Speckhard has interviewed hundreds of IS supporters throughout the world. She says religion is part of extremist ideology, but it is rarely the most important part.

She says joining an Islamist extremist group or even discussing it on social media often provides meaning and purpose to a person's life.

She tells about a young Christian religion teacher who lived with her grandmother in an isolated community in the northwestern United States. After IS murdered an American reporter, she tweeted, "Why would a terrorist behead a journalist?"

IS answered: "Because this is a revolution. Blood is shed in a revolution and we are changing the world."

The IS recruiter then asked the young woman, "Did you know Islam is the completion of Christianity?" The question was the beginning of the woman's conversion to Islam and radicalization.

Speckhard says the woman "was lonely." Then, all of a sudden, people were paying attention to her, tweeting her, offering to Skype with her.

"And eventually," says Speckhard, "she converted because she wanted to belong to something. She wanted something in her life."

In the case of Omar Mateen, the man who killed 49 people in Orlando this month, investigators still do not know how much contact he had with the IS network and ideology. However, they have a lot of evidence that his life was "off track."

His first wife said she divorced him because he became violent toward her. She said she believed he may have been suffering from bipolar disorder, a sickness of the brain. A co-worker said Mateen often insulted women and other groups. And Mateen's father said his son was deeply angered after seeing two men kissing.

These cases, along with information researchers are collecting, challenge the belief that Islam is the cause of many terrorist acts. Psychologist Anne Speckhard says many IS supporters have converted to Islam "because it is meeting a need, not because they are necessarily looking for a religion."

If Speckhard and others are correct, and religious beliefs are not the cause of violent extremism, some may now ask this question: How do we use our resources effectively to stop attacks?

In the second part of this series, VOA explores what effect anti-Muslim rhetoric has on the Islamic community in the United States, and on the country's ability to effectively counter terrorism.

extremism – n. belief in and support for ideas that are very far from what most people consider correct or reasonable

off-track – expression away from the main point, thought, etc.; following a course of action that will lead to failure

behead – v. to cut off the head of (someone) especially as a punishment

(blood)shed – v. the killing of people especially in a war

Christianity – n. the religion that is based on the teachings of Jesus Christ

Skype – v. to communicate on the internet using the program Skype

bipolar disorder – n. a mental illness in which a person experiences periods of strong excitement and happiness followed by periods of sadness and depression (also called "manic depression")

challenge – v. to say or show that (something) may not be true, correct or legal