Isolated by Oceans: Hawaii, Other Islands Hold Down Virus

Update Required To play the media you will need to either update your browser to a recent version or update your Flash plugin.
By Susan Shand
06 May 2020


Pacific islands like Hawaii usually depend on their beauty and beaches to draw in visitors to keep their economies strong. But in an effort to fight the new coronavirus, island leaders have been forced to take an extreme step - cutting off tourism completely.

Hawaii has among the lowest COVID-19 infection and death rates in the United States. In March, Governor David Ige did something no other state truly could do: close its borders.

The move stopped the tens of thousands of visitors who usually arrive every day. People who do make it onto the island face a required two-week quarantine. 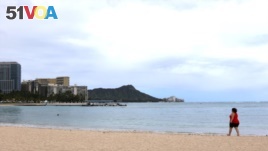 In this April 21, 2020, photo, a woman walks on Waikiki Beach in Honolulu. (AP Photo/Caleb Jones)

"We also had the opportunity to enact a quarantine, make it meaningful and most importantly, know that we could really...reduce the number of visitors we get," he told the Associated Press.

With more than 3,220 kilometers of ocean separating it from the rest of the world, Hawaii is in a much better position to control the spread of the virus. Unlike states like Alaska, Montana and Wyoming, it is not possible to drive into Hawaii or take a train.

While Hawaii has been effective in defending against the virus, the travel restrictions have severely damaged the tourist-fueled economy. As a result, Hawaii now has one of the nation's highest unemployment rates, with nearly 33 percent of workers jobless.

The governor said keeping the community safe and healthy "had come at the expense of more than 225,000 residents who are now unemployed."

Nearly all the places in the world that do not have confirmed COVID-19 cases are in the Pacific.

American Samoa is a U.S. territory west of Hawaii. It is the nation's only place that is free of the virus. Officials there have asked Hawaiian Airlines to stop daily flights from Honolulu in an effort to keep the territory virus-free.

Every other U.S. state and territory, including the islands of Guam and Puerto Rico, have reported cases of coronavirus.

Hawaii became the first state to require travelers to quarantine as a way to keep the virus from spreading. The state has arrested several tourists for breaking quarantine, which can bring a $5,000 fine and up to one year in jail.

Arrivals to Hawaii for this time of year fell from about 30,000 people a day to just a few hundred. Most of the arrivals are Hawaiians returning home.

Mary Ann Jenkins left Honolulu to see family in Indiana in early April. She knew she would have to quarantine when she returned.

Indiana did not have the same restriction. "There was really no problem going into Indiana," Jenkins said. She agrees with the governor's order to limit visitors to Hawaii.

"On the mainland, you can go from one state to the next and you're just still driving down the road so you never know who, what or where you're coming in contact with," Jenkins said.

Hawaii also expanded testing to close contacts of infected people, said Lieutenant Governor Josh Green. He says that for the next year, or until the virus is no longer a threat, travelers should be tested 72 hours before arriving.

tourism - n. the business of visiting a place for pleasure

opportunity - n. the chance to effect something

at the expense of - expression. using someone or something to one's own benefit