Update Required To play the media you will need to either update your browser to a recent version or update your Flash plugin.
By John Russell
29 January, 2017


Israel, a sunny country along the Mediterranean Sea, is a perfect place for solar power. Even so, solar power supplies only a small percentage of the country's energy needs.

But that situation is beginning to change. 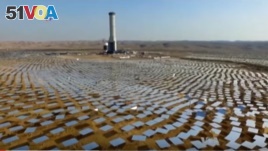 The tower will be 250 meters tall. It will be the tallest solar tower in the world. This information comes from Eran Gartner, the CEO of Megalim Power Limited, which is responsible for part of the solar project.

The power station, Gartner says, will be what is called concentrated solar power. It will be surrounded by 50,000 mirrors spread over 3 square kilometers. The mirrors will concentrate all of the sunlight onto the solar tower.

Here is how it works: Gartner explains that a boiler is at the top of the tower. It will use the heat of the sun to turn water into steam. The steam will make a turbine turn. The turning will create power.

There are already a dozen similar solar tower fields around the world. Currently, the largest is the Ivanpah plant in California. It has some 170,000 mirrors around three towers which are each 140 meters tall.

The new tower, along with three other similar solar projects in the Negev Desert, are part of Israel's plans to develop its renewable energy sector. The Israeli government has set a renewable energy target of 10 percent by 2020.

Together, the new solar projects will generate some 310 gigawatts of power, or about 1.6 percent of the country's energy needs, reports the Associated Press.

Eran Gartner of Megalim Power explains why Israel has not developed its solar power potential before.

He says that Israel did not want to dedicate the land necessary for large-scale solar power production. Such large-scale projects also require access to infrastructure, such as water and electricity, which are difficult to connect to remote areas in the Negev Desert.

Israel's Finance Ministry said it has tried to promote the solar industry in other ways. It created incentives for solar power and reduced bureaucracy for Israelis who want to install solar panels on their roofs.

Leehee Goldenberg is with the Israel Union Environmental Defense, a non-profit organization. He says that even though Israel is making progress, it is still behind in taking advantage of its renewable energy.

In addition to its solar potential, Israel has major natural gas deposits offshore. The country now gets some 70 percent of its energy from natural gas.

Yaron Szilas is the CEO of Shikun and Binui Renewable Energy, the lead developer of a second solar-thermal plot in the Negev Desert. He said the natural gas discovery has delayed the promotion of solar energy.

"With all the sun we have and how progressed we are in technology, these goals are very, very, very modest," he said. "But these are the goals that were set, and we are working toward it."

Kevin Enochs wrote this story for VOA News. John Russell adapted it for Learning English with additional information from AP. Kelly Jean Kelly was the editor.

concentrated – adj. existing or happening together in one place : not spread out

boiler – n. a large container in which water is heated to produce steam in an engine