Update Required To play the media you will need to either update your browser to a recent version or update your Flash plugin.
By Ashley Thompson
14 May, 2018

Netta Barzilai is sassy, she is fun and she can sing. Now, the 25-year-old Israeli is the winner of the 2018 Eurovision Song Contest.

She won with a catchy dance song about women's empowerment called "Toy."

It is Israel's first win since 1998, and fourth win overall. Netta beat competitors from 42 other countries.

About 200 million people watched this year's contest, held in Lisbon, Portugal. Votes came in live Saturday from the capitals of participating countries. The final moments were tense, with Israel in a close, five-way race with Cyprus, Austria, Sweden and Germany. 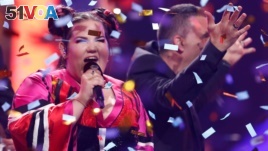 Israel's Netta performs after winning the Grand Final of Eurovision Song Contest 2018 at the Altice Arena hall in Lisbon, Portugal, May 12, 2018.

Netta was already a huge hit in Israel thanks to her personality and humorous performances.

Her winning song's main line is "I'm not your toy, You stupid boy, I'll take you down." Her message seems to appeal to fans. The song had more than 20 million views on Eurovision's YouTube page even before Saturday's main event.

Her win means Israel will host next year's Eurovision contest. But it also means much more than that. Israel often feels under siege. And it celebrates international success that supports its image of itself as a normal country -- in a big way.

A win at the hugely popular Eurovision contest is as big as it gets. For example, "Hallelujah" became the country's unofficial national song after it won Eurovision for Israel in the late 1970s. And Dana International became a national hero when she won with "Diva" in 1998.

Izhar Cohen was Israel's first Eurovision winner back in 1978. He told the Associated Press that Netta's win is "a moment of joy that makes everybody together...."

"Because we are separated with so many views and political sides and all that, this contest made us one country, one people and I'm so happy for that," he said.

‘Next time in Jerusalem'

News of Israel hosting next year's contest in Jerusalem came as Israel marked the yearly Jerusalem Day, the anniversary of what it describes as the city's "unification" following the 1967 war. It also came a day before the United States officially moved its embassy to Jerusalem from Tel Aviv.

On Saturday night, the Eurovision television hosts turned to each country to hear their votes. Jerusalem was the only capital city not called by name.

As she picked up her award, Barzilai shouted to the crowd, "I love my country. Next time in Jerusalem!"

siege - n. a situation in which soldiers or police officers surround a city, building, etc., in order to try to take control of it