Update Required To play the media you will need to either update your browser to a recent version or update your Flash plugin.
By Hai Do
17 May 2021

Israeli military said it destroyed 15 kilometers of tunnels and the homes of nine Hamas commanders. The attacks on Monday also killed a top leader of the Islamic Jihad militant group in Gaza whom the military blamed for some of the thousands of rocket attacks launched at Israel in recent days.

The war started last Monday, when Hamas militants fired rockets at Jerusalem after hundreds of Palestinians were hurt in clashes with Israeli troops during the Muslim holy month of Ramadan. At the same time, Israel was planning to remove Palestinian families from an east Jerusalem neighborhood that it captured after the 1967 Arab-Israeli War.

The Israeli military said Hamas and other armed groups had fired more than 3,000 rockets from Gaza over the past week. Israel's missile defense system intercepted most of them, it said. 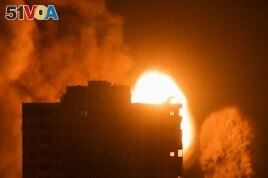 Smoke and flames rise above a building during Israeli air strikes, amid a flare-up of Israeli-Palestinian violence, in Gaza City May 17, 2021. REUTERS/Ibraheem Abu Mustafa

In return, the Israeli military has launched hundreds of airstrikes against targets in Gaza. The latest strikes came a day after Israel's weekend attack, which killed 42 people and destroyed three buildings.

The Gaza Health Ministry said at least 200 Palestinians have been killed in the airstrikes so far, including 58 children and 34 women. Another 1,300 are reportedly wounded.

In Israel, ten people have been killed, including two children. Police said an Israeli man also died in hospital on Monday after being attacked and injured in Lod last week after clashes broke out in mixed Jewish-Arab communities in Israel.

Israeli Prime Minister Benjamin Netanyahu said Sunday that Israel's attacks were at "full-force" and would "take time." Israel, he said, "wants to levy a heavy price" on the Hamas militant group.

A former Israeli air division commander said on Monday, "the IDF (Israeli military) can go with this forever. And they (Hamas) can go on with their rockets, sadly, also for a very long time. But the price they are paying is rising higher and higher."

Hamas' top leader, Ismail Haniyeh, said the group has been contacted by the United Nations, Russia, Egypt and Qatar as part of cease-fire efforts. He blamed the war on Israel's actions in Jerusalem. He said the group "will not accept a solution that is not up to the sacrifices of the Palestinian people."

International efforts to end the war

In his first comments since the start of the war, Egyptian President Abdel Fattah el-Sissi said his government is working to "urgently" end the violence. Egypt, which borders Gaza and Israel, has played a central role in negotiating cease-fires after earlier rounds of fighting.

Egypt's Foreign Minister Sameh Shukry said the country is working with international partners to reach a truce. He said he hopes the United States will be part of such an effort to avoid war and destruction in the area. He also called for Israel's government to reduce tensions in Jerusalem and stop efforts to remove Palestinians from east Jerusalem.

Speaking to reporters during a trip to Denmark, U.S. Secretary of State Antony Blinken said the U.S. would support any initiative to stop the fighting. He added, "It is up to the parties to make clear that they want to pursue a cease-fire."

The Biden administration has refused so far to criticize Israel's part in the fighting or send a top-level diplomat to the region. But some members of Biden's Democratic Party have asked the U.S. to do more to stop the conflicts.

Rep. Adam Schiff is the Democratic chairman of the House intelligence committee. He told CBS's "Face the Nation" on Sunday, "I think the administration needs to push harder on Israel and the Palestinian Authority to stop the violence, bring about a cease-fire, end these hostilities, and get back to a process of trying to resolve this long-standing conflict."

And a group of 29 Democratic senators also called "for an immediate ceasefire agreement in Israel and the Palestinian territories to prevent further loss of life and further escalation of violence."

From Moscow, a spokesman for President Vladimir Putin said Russia is "extremely concerned" about the destruction in Gaza. He added Russia is working with Middle East countries, the European Union and the U.S. to "stop the exchange of strikes."

Hai Do adapted this story for Learning English based on reporting from the Associated Press and Reuters. Susan Shand was the editor.

intercept – v. to stop and catch something before it gets there

levy – v. to demand and collect

pursue – v. to try to get or do something

resolve – v. to find an answer or solution

escalation – n. becoming or making something worse or severe