Update Required To play the media you will need to either update your browser to a recent version or update your Flash plugin.
By VOA
10 June, 2015


Israel is increasing its efforts against an international boycott movement. Some activists are calling for the boycott of Israeli-owned businesses that operate in the Israeli-occupied Palestinian territories. Observers say support for the boycott appears to have increased after Prime Minister Benjamin Netanyahu said he would never permit creation of a Palestinian state. Since then, the Israeli leader has made comments that appear to conflict with his earlier statements.

The BDS Movement aims to put financial pressure on Israel to end the occupation and settlement of land it captured in the 1967 Six-Day War. Middle East expert Sharif Nashashibi says the campaign is growing stronger.

"The Boycott, Divestment and Sanctions Movement has been increasingly effective. The Palestinian Authority is taking Israel to the International Criminal Court. As welcome as worldwide recognition is, there has to be accompanying pressure on Israel to make that (Palestinian) state a reality."

The French-owned telephone company Orange said last week it would withdraw from a deal with Israeli operator Partner. The head of Orange later said his comments were based on finances, not politics. 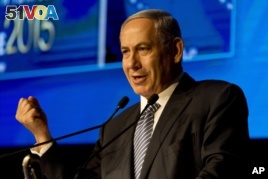 Prime Minister Netanyahu reacted angrily to the announcement. He invited the company's leader to come to Israel to explain the decision.

Mr. Netanyahu said "the government will stand against any attempt to harm Israel with lies, false accusations and boycotts. We will push back any pressure," he said. "We will report the lies, and attack the attackers..."

Mr. Fabius said the head of Orange can decide what his company does. But he said a boycott is not recognized under international law.

Most of Israel's allies have criticized the boycott movement. But they are becoming tired of waiting for Mr. Netanyahu to act. That is the opinion of Yossi Mekelberg, professor of International Relations at Regents University London.

"I think gradually it dawns on Israelis that there is out there, within international organizations, in governments, the European Union, even in the United States, a lot think that the Netanyahu government is blocking peace through expanding settlements. And hence they think about what can be done in order to enhance the chance of a peace agreement. I think they think targeting economically the settlements."

U.S. President Barack Obama has said the international community does not believe that Israel is serious about a two-state solution.

Israel blames Palestinian militants for blocking any peace process. On Sunday, Israeli aircraft struck the Gaza Strip after a rocket attack was launched into southern Israel.

Correspondent Henry Ridgwell reported this story from London. George Grow adapted it for Learning English. Christopher Jones-Cruise was the editor.

campaign(ing) – v. to lead an effort in support or against someone or something

divestment – n. the selling of stock or property because of an order

sanction(s) – n. a measure or action designed to force a country to obey international laws

What is your opinion of the boycott movement? We want to hear from you. Write to us in the comments section.