Update Required To play the media you will need to either update your browser to a recent version or update your Flash plugin.
By VOA
04 August, 2014


Israel and Hamas each accused the other of breaking a seven-hour long cease-fire early Monday. The truce was designed to give Palestinian refugees a chance to go home or buy supplies.

Palestinians said Israel had bombed a refugee camp in Gaza City. An 8-year-old girl was reported killed and more than 20 other people wounded.

Israel said at least four rockets had been fired at its territory from Gaza. 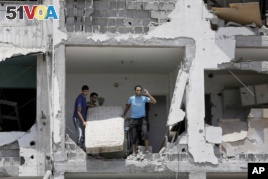 The death toll from the Ebola outbreak has reached nearly 900 with over 1600 cases confirmed.

There is some good news. The head of the U.S. Centers for Disease Control said that Kent Brantly "seems to be improving." He is the American doctor who became infected with the Ebola virus in Liberia.

Dr. Brantly received a dose of experimental serum before leaving Liberia. He also received blood from a 14-year-old boy who had survived Ebola under his care.

Rescue crews in southern China are battling heavy rain as they work to reach survivors from the earthquake on Sunday. The earthquake killed at least 398 people and injured 1,800 others in the Yunnan province.

James Brady, the White House press secretary who was shot in the assassination attempt on President Ronald Reagan, has died at 73. Brady suffered a head wound and was paralyzed from the shooting.