Update Required To play the media you will need to either update your browser to a recent version or update your Flash plugin.
By VOA
11 July, 2015


Israel knows how to deal with drought. The small Middle Eastern country has experienced dry weather conditions and water shortages for many years. The American state of California is in the fourth year of a drought. So a Jewish group proposed a conference to show Californians what Israelis can offer in terms of technology, knowledge and support.

Barry Broad is head of the Sacramento Jewish Federation. He says the idea for the meeting was a product of Sacramento's Sister City relationship with the Israeli city of Ashkelon.

"We thought given California's water situation -- we're in a very serious drought -- and Israel's advanced technology in this area...this would be the perfect Sister City event to plan. Bringing experts from Israel to tell us what are the things we can learn from Israel's longer and more extensive history dealing with life in a permanently arid climate."

In California, hundreds of thousands of people pay a flat rate for their water. In other words, they pay the same amount, whether they use a lot of water or very little. 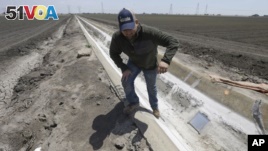 File - Farmer Gino Celli climbs out of a irrigation canal that is covered in dried salt on a field he farms near Stockton, Calif., May 2015.

Israel treats water differently. Eilon Adar is director of the Zuckerberg Institute for Water Research at Ben-Gurion University in the Negev desert. He says water is considered a national resource, like oil or natural gas. The Israel Water Authority sets the price of water. Mr. Adar says that the more water someone uses, the more they must pay.

Israel has five desalination plants in operation. They remove salt from sea water so it can be drunk and used to cook and clean clothes. More than half of the water for homes, farms and businesses comes from this desalination process.

A desalination plant will soon begin operating near the city of San Diego, California. California Governor Jerry Brown has called for a 25 percent reduction in the use of water. And in November, voters approved a plan for the government to raise money to help solve the state's water problems.

Mr. Adar says the biggest barrier to solving California's long-term water problem may have more to do with politics than technology. He says large cities in the southern part of the state demand fresh water from the northern part.

Darryl Steinberg is the former president of the California Senate. He says cities throughout the state have to stop fighting each other for water.

"Truth is, we don't have room for division here. It's one state. There's less water. There's more people, and we're going to have to be much more aggressive and come together in a much more effective way over time, if we're going to deal with this. And I'm confident we can."

Mr. Adar says farmers, property owners and water companies must work together to save water. He says Israel will use its advanced technology, information and experience to help any country that asks.

Jan Sluizer reported on this story from Sacramento, California. Christopher Jones-Cruise adapted it for Learning English. George Grow was the editor.

resource – n. something that a country has and can use to increase its wealth

advanced – adj. having or using new and modern methods

unit – n. a single thing, person or group that is a part of something larger

desalination – n. the process of removing salt from (something, such as water)

Is your country dealing with drought? We want to hear from you. Write your thoughts in the comments section.