Update Required To play the media you will need to either update your browser to a recent version or update your Flash plugin.
By Susan Shand
16 October 2021


Israeli scientists say they have found a huge winemaking factory that is about 1,500 years old.

The archaeologists discovered the factory in the central town of Yavne. It includes five wine presses, storage areas, kilns for making clay containers and tens of thousands of wine jugs and pieces of clay, they say. 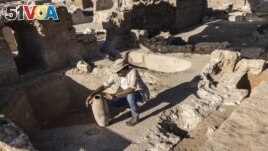 Israel's Antiquities Authority said the discovery shows that Yavne was a great wine-making area during the Byzantine period. Researchers estimate the factory could have produced some 2 million liters of wine a year.

Antiquities officials said the factory was uncovered over the past two years.

Jon Seligman was one of the leaders of the dig, or excavation. He said the wine made in the area was known as "Gaza" wine. The product was exported to many places.

"This was a prestige wine, a light, white wine, and it was taken to many, many countries around the Mediterranean," Seligman said.

The jugs made at the factory were known as Gaza jars. The containers have been found in other countries, including Egypt, Turkey and Greece.

Seligman said wine was not just used for enjoyment in ancient times.

He said, "...This was a major source of nutrition and this was a safe drink because the water was often contaminated, so they could drink wine safely."

The Associated Press and the Reuters News Agency reported this story. Susan Shand adapted it for Learning English. Ashley Thompson was the editor.

kiln – n. n oven or furnace that is used for hardening, burning, or drying something

jug – n. a large, deep container with a narrow opening and a handle

excavate – v. to uncover (something) by digging away and removing the earth that covers it