Update Required To play the media you will need to either update your browser to a recent version or update your Flash plugin.
By Bryan Lynn
19 December, 2018


An Israeli company says it has produced the world's first steak "grown" in a laboratory.

Researchers from Tel Aviv-based Aleph Farms say they successfully created the meat using methods that do not harm animals. The company claims its scientific invention has the "true texture and structure of beef muscle tissue steak."

Shulamit Levenberg is the co-founder and chief scientific officer of Aleph Farms. She considers the company's product "clean meat." She says this is because it is grown in a clean, controlled setting and does not require the killing of an animal.

Some opponents of lab meat production have rejected the term "clean meat" and suggested that "synthetic meat" would be more exact. Many companies have attempted to create realistic meat replacements with mostly vegetable-based products. Others, like U.S.-based company Just, also have plans to produce beef grown inside a lab.

The process begins when scientists collect live cell tissue from real cows. Aleph Farms says this is easily completed without harming the animals. The cells are then fed nutrients to make them grow. 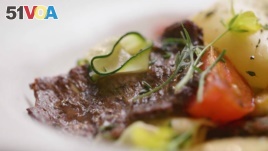 Aleph Farms, an Israeli company based in Tel Aviv, announced it has created the world's first steak grown in a laboratory. (Photo: Aleph Farms)

The cells are then combined through a process the company says uses three-dimensional or 3-D technology to form realistic tissue. The company says small pieces of meat can be produced in as little as three weeks, with each costing about $50 to make.

Levenberg says animal meat grown in a controlled setting has mostly been limited to simple structures of one or two kinds of cell tissue. This has meant companies have struggled to produce a lab-grown meat that enjoys the similar texture, shape and taste of real steak. So far, cell-created meat development has been limited to ground meat.

Levenberg said Aleph Farms uses four different kinds of animal cells found in traditional cuts of meat. As a result, it can produce a product containing similar properties of steak, including muscle, fat and connective tissues. The company considers this "the key to a product that will be closer to the beef that people crave."

Aleph Farms includes a video on its website that shows its steaks being cooked, prepared and eaten.

The company is still developing its technology in an effort to bring production costs down. The steak product is expected to be ready to sell within two years. Aleph Farms hopes the process can greatly reduce the amount of land, water and food resources necessary for traditional beef production methods.

The United Nations Food and Agriculture Organization has estimated that demand for meat is likely to grow by nearly 70 percent by 2050. The U.N. says such demand could create resource shortages around the world and have harmful effects on the environment.

Earlier this year, Dutch company Mosa Meat announced plans to make and sell laboratory-grown meat in restaurants by 2021. The company has been developing its methods since announcing in 2013 it had produced the world's first hamburger in a lab.

Mosa Meat uses a similar scientific process for creating beef. But instead of steak, Mosa Meat plans to begin its market launch with ground beef products, mainly for making hamburgers.

Bryan Lynn wrote this story for VOA Learning English, based on a report from the Associated Press and online sources. Caty Weaver was the editor.

What do you think of meat grown in a lab? Would you be willing to try it? Write to us in the Comments section, and visit 51VOA.COM.

texture – n. the way something feels when touched

synthetic – adj. not made from natural substances

dimensional – adj. of or related to a measurement in any one direction

patty – n. piece of food, usually meat, that is made into a round shape and cooked

emission – n. something being released, usually into the air