Update Required To play the media you will need to either update your browser to a recent version or update your Flash plugin.
By Dan Friedell
17 October 2022


People in Europe are soon to have another choice when looking for meat at food stores or choosing a meal at a restaurant.

Instead of the usual meat from an animal, they may soon be able to buy a kind made from plants and formed by computers. 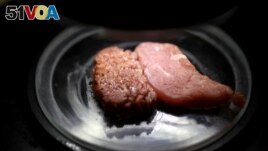 Redefine Meat makes an "alternative" food product that it says looks and tastes like meat. It contains plant material like soy, beets, pea protein and coconut fat. It is shaped by the printer to look like meat.

Giraudi Meats is known for bringing in high quality meat from animals and selling it in food stores all around Europe.

Redefine Meat makes its products near Tel Aviv and at a factory in the Netherlands. Its meat will be available at shops and restaurants in France this month. Next it will be sold in Italy, Greece and Sweden.

The product, called New Meat, is already sold in Great Britain, Germany and the Netherlands. Some restaurants pay $40 per kilogram for the New Meat.

A Redefine Meat founder and leader, Eshchar Ben-Shitrit, says the food has all the qualities of real meat just manufactured in a different way. And, he says that production capacity would reach more than 15 metric tons a day this year.

"The fact that our products are now being sold by Giraudi Meats, the same people who sell high-quality meat, shows that they are not compromise vegan products," he said.

Success is not guaranteed in the substitute meat market, however. Another company that makes such products is United States-based Beyond Meat. Over the summer, Beyond Meat said it did not expect sales of its product in 2022 to reach the number it sought. The American company said it will reduce its number of employees and cut other costs.

Plant-based meats are seen as better for animals and the environment. But after early interest, business experts say people are not often buying alternative meats.

They think that is because alternative meats are more costly than traditional meats in a time where people around the world are worried about rising food costs.

alternative –adj. different from something traditional

founder –n. a person who starts a company or begins something new