Update Required To play the media you will need to either update your browser to a recent version or update your Flash plugin.
By Gregory Stachel
30 March 2022


An Israeli company will test its equipment on astronauts in space expected next week during a SpaceX flight to the International Space Station (ISS).

The company Brain.Space has been developing methods to study brain activity for four years.

The company said on Monday that three astronauts on the planned private space firm Axiom Space's mission to the ISS will wear its devices. The equipment will be a head covering, or helmet, that can record electrical brain activity through a test called an electroencephalogram (EEG). 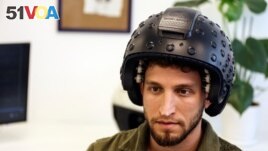 A worker at the Israeli startup Brain.Space shows an electroencephalogram (EEG) enabled helmet, due to be used in an experiment on the effects of a microgravity environment on the brain activity of astronauts, in Tel Aviv, Israel on March 23, 2022. (REUTERS/Nir Elias)

The 10-day mission is the first private trip to the space station. The launch is set for April 3 with four astronauts.

Brain.Space Chief Executive is Yair Levy. He told Reuters scientists know that a low-gravity environment affects the way the body works. He said that such an environment will probably also affect the brain. He said his company would like to study that.

Levy said that data has continuously been collected on heart rate, skin resistance, and muscle mass through measurements in space but not brain activity.

Brain.Space's effort joins 30 experiments that will be included in the so-called Rakia Mission to the ISS.

Three of the four astronauts, including Israeli Eytan Stibbe, will wear the special helmet. The device has 460 points that connect to the top of the head. It performs a number of functions for 20 minutes a day. During that time, data will be sent to a computer on the space station. The company said one of these jobs, called the "visual oddball," has been effective at finding unusual brain activity.

Similar studies using these functions have been completed on Earth. After the mission, Brain.Space will compare the EEG data to look for any differences in brain activity between Earth and space.

Company officials say such experiments are needed because long-term space exploration and "off-world living are within grasp."

Brain.Space said it raised $8.5 million in investments. It describes itself as a brain infrastructure company.

"Space is an accelerator. The idea is to revolutionize and make possible brain activity apps, products and services that's as easy as pulling data from an Apple Watch," Levy said. He said measuring mental health disorders like ADHD could be a possible goal.

function –n. the special purpose or activity for which a thing exists or is used

grasp – n. the ability to get or find something

accelerate – v. to quicken the progress or development of something

revolutionize – v. to change (something) very much or completely