It’s Alarming: What Wakes You Up Each Morning?

Update Required To play the media you will need to either update your browser to a recent version or update your Flash plugin.
By Anne Ball
17 February 2020


How do you wake up in the morning?

If you set an alarm on your phone or clock that sounds like this:

That hard, unpleasant sound may be making it harder to shake off the sleepy feeling in the morning known as grogginess.

So, is there a better way to wake up? A recent study says yes. The answer is music. Researchers say alarms that have a melody – like the beginning of this song – can help people feel fresher in the morning.

The study, carried out by researchers in Australia, involved 50 people. The study subjects answered questions about the alarm sound they like to wake up to, how they feel about that sound and how they feel when they wake up. The findings appeared this month in the publication PloS One.

The researchers found that people who wake up to musical alarms reported feeling more awake and alert.

Stuart McFarlane was a lead writer of the study. He told VOA, "We are very surprised by these findings as one might expect a harsh beeping sound to be more successful," at waking up a person. 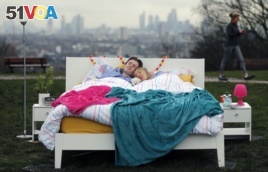 A couple lay in a double bed during a photo opportunity organised by the Mental Health Foundation to mark World Sleep Day, on Parliament Hill, in London, March 15, 2018.

Sleep inertia is another term for grogginess. It means a person has a heavy feeling when waking up, and has trouble getting moving again after sleeping.

McFarlane said people need to better understand sleep inertia's harmful effects on human performance later in the day. The grogginess we may feel in the morning usually lasts for up to 30 minutes. But he said it has been reported to last from two to four hours.

Not everyone will experience the full effect. But for those who do, "care should be taken" when performing duties that require a top performance within this period, he said. This includes "dangerous tasks like driving or riding our bikes" shortly after waking up.
The same is true for people who work in dangerous situations shortly after they wake. They include firefighters and pilots.

Sleep inertia has been linked to major accidents including airplane and shipping crashes.

Why is music better?

So, what makes musical alarms better for waking up?

The researchers think the music may be more successful in reducing sleep inertia because it has several tones, compared to the single tone of a "beeping" alarm. McFarlane said that the changes over time between the music tones may help increase a person's attention when waking from sleep.

But, he added, "it is early days though and more work is needed" to fully know the answer.

And is there a kind of music that is best to wake up to? There may be, McFarlane said.

"We could suggest alarm sounds that are tune full and easy to hum or sing along with. The current sounds I have been using include ‘Close to me' by the Cure and ‘Borderline' by Madonna."

No matter how you wake up, experts say, the amount of sleep you get also matters – a lot.

Dr. Stuart F. Quan is the clinical director of the Division of Sleep and Circadian Rhythm Disorders at Brigham and Women's Hospital in Boston, Massachusetts. He offered some suggestions for how people can get better sleep and feel fresh each morning.

How do you wake up in the morning? If you use an alarm, what does it sound like? What do you think of this story? Write to us in the comments section below.

alarm – n. a device that makes a loud sound as a warning or signal

shake off – v. an act of getting rid of something unpleasant or unwanted

grogginess – adj. not able to think or move normally because of being tired, sick

alert – adj. able to think clearly and to notice things

harsh – adj. unpleasant and difficult to accept or experience

tone – n. the quality of a sound produced by a musical instrument or singing voice