Update Required To play the media you will need to either update your browser to a recent version or update your Flash plugin.
By VOA
23 October 2021

The words we say are weightless sounds in the air. But they are powerful. What we say can greatly affect people, situations -- just about everything.

That is why, sometimes, it is a good idea to walk away from a heated argument. If we feel angry, we might say something we regret.

Perhaps anger is not the problem. Maybe your thoughts on a situation or issue are not fully formed. But you speak anyway.

Or maybe you simply have a secret -- one that you are dying to share!

Whatever the reason, sometimes we speak when maybe we shouldn't. And once those words are out there, there is no taking them back. The damage is done.

Or, we could say: the genie is out of the bottle. 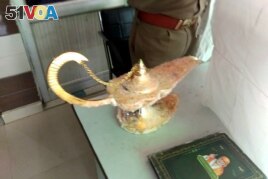 Genie usually live in lamps. But in this English expression, we say bottle. This photograph taken on October 29, 2020 shows a lamp which the owner claims had magic powers as described in the popular folk tale "Aladdin's lamp." It was allegedly sold for $93,000. Photo released by the Uttar Pradesh Police (UP Police).

A genie is a trouble-causing spirit with magical powers from Middle Eastern folktales. Some experts say this expression may be connected to the centuries-old stories of Aladdin. He is a young man who releases a genie trapped in a small container. That's the bottle. Once out, the genie is powerful and tricky. The result? A lot of trouble.

So, if you "let the genie out of the bottle," undesirable results, or consequences, will follow.

"To let the cat out of the bag" has a similar meaning. The cat is in the bag for a reason. When you let it out, there will be consequences. And both the genie and the cat, as well as the words we say, cannot be recaptured.

But how do we use these expressions? Here is one example:

The politician says she misspoke about her plans to run for president. But the press had already reported on it. The genie was out of the bottle and could not be put back in.

Here is another example. Two co-workers use both expressions.

A: Tony really let the cat out of the bag at work today. He told everyone that Mary found another job and was leaving the company next month.

B: What?? But she hasn't told management yet!

A: He apologized but there is no putting THAT genie back in the bottle.

B: I bet Mary would like to put Tony in a bottle.

A genie is far more dangerous than a cat and harder to catch. So, the two sayings are not always interchangeable.

Some experts say social media is damaging users, especially children. But the technology and its appeal is here to stay. No one can put that genie back in the bottle.

In that example, you would not use "let the cat out of the bag." Instead, use it when someone has said something that was supposed to remain a secret. You can't take words back and you can't re-hide a secret. Something has been done and can't be undone.

And that's the end of this Words and Their Stories. Thanks for listening!