It's Time to 'Play Possum'

Update Required To play the media you will need to either update your browser to a recent version or update your Flash plugin.
By Anna Matteo
29 September, 2018


Now, it's time for Words and Their Stories from VOA Learning English.

On this program, we talk about words and expressions in American English. And today we will talk about "defense mechanisms." These are different ways the body reacts to changing conditions to keep it safe.

To learn more about defense mechanisms, let's turn to the experts – animals! Many of them are experts at avoiding danger to stay alive. When animals are frightened or feel threatened, they take steps to protect themselves.

A monkey runs for the trees. Birds take flight. A turtle sticks its head back into its shell. An armadillo rolls up into a ball. And a skunk releases an unpleasant chemical. 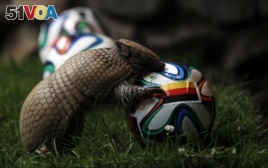 This armadillo is called Norman. He has been known to predict World Cup winners.

The ostrich, not known for its brainpower, buries its head in the sand as if nothing else can see the rest of its huge body. In American English, we also hide our heads in the sand to avoid something unpleasant.

But another animal, the opossum, does something even more unusual. It stops moving and pretends to be dead.

An opossum is a somewhat small animal with a long pointed snout. Most have a white face and grayish body.

Opossums were one of the first wild animals encountered by white settlers in the English colony of Virginia. The name "opossum" entered the English language in the early 17th century. It means "white dog" in the Native American Powhatan, or Algonquian, language. Many people drop the first "o" in the name, and use the term "possum" instead.

A possum plays dead to trick other animals or the person hunting it. The possum hopes that its hunter is not interested in a dead possum, only a live one. Faking death suggests: "Nothing to eat here. Just a dead possum. You can go on your way."

An opossum playing dead can be, in a way, great theater. If the animal world gave awards for acting, the opossum might win the award for ‘Best Death Scene.'

However, before we give that acting award, science may want to weigh in.

Scientists explain that opossums are not acting at all. They can't help it! Playing dead is an involuntary reaction to a threat. It is simply the animal's way to protect itself against danger. When it feels threatened, its body plays dead.

But why let a few scientific facts change a good expression. We haven't! The fact that possums are not playing or acting at all has not changed the way we use the expression "playing possum." And you can use this expression in many different situations.

For example, we play possum when we lie to avoid something unpleasant.

Let's say you have a big test at school, but you did not prepare for it. You may pretend to be sick and stay home. Or you may want to avoid a difficult project at work. So, you call in sick. Both are examples of playing possum to avoid work or responsibility.

We also use the expression "play possum" when feigning ignorance. In other words, we pretend not to know something so that we seem in the dark. Again, this is a good way to avoid responsibility.

Or we can simply play possum when we want to hide away and avoid other people.

We have another expression for this form of playing possum. If I lay low, I don't respond to email; I don't answer my phone; I don't even open my door. I am avoiding the world. Singer Alan Jackson does the same thing in this song, "Just Playing Possum."

Now, sometimes "playing possum" is the same as burying your head in the sand. But sometimes it is not. So, they are not interchangeable all the time.

Like our friend the ostrich, when you bury your head in the sand, you are avoiding a bad reality -- something you wish were different. You are not trying to lie or deceive anyone but yourself.

It's a way of tuning out life's unpleasant situations. If the daily news upsets you, you may choose to bury your head in the sand and not tune in to any news programs.

Another thing to note, we use "burying your head in the sand" for both serious and lighthearted issues. But we usually use "playing possum" in a lighthearted way.

I mean, you have to agree, it does sound much nicer than lying.

Anna Matteo wrote this story for VOA Learning English. The colonial history of opossums was researched by VOA's Jessica Berman, Herb Sutcliffe and the Special English Branch. George Grow was the editor. The song used in the story is Alan Jackson singing, "Just Playing Possum."

defense mechanism – n. a process in the brain that makes you forget or ignore painful or disturbing thoughts, situations, etc. : a reaction in your body that protects against disease or danger

pretend – v. to give a false appearance of being, possessing, or performing does not pretend to be a psychiatrist : to make believe : feign he pretended deafness : to claim, represent, or assert falsely

involuntary – adj. not done or made consciously : not done by choice

feign – v. to give a false appearance of : induce as a false impression

speaker – n. a device that changes electrical signals into sounds loud enough to be heard at a distance

in the dark – phrase in a state of ignorance about something

scene – n. a view or sight that looks like a picture

interchangeable – adj. capable of being used in place of each other