Madonna: It Was Not Meant to Be an Aretha Tribute

Update Required To play the media you will need to either update your browser to a recent version or update your Flash plugin.
By Caty Weaver
21 August, 2018

American singer Madonna is being hotly criticized for her comments about legendary musical artist Aretha Franklin who died last week.

The pop star told a lengthy story that began with the words:

"Aretha Louise Franklin changed the course of my life."

It seemed to be the start of a tribute to the woman known as the Queen of Soul. But critics say Madonna's speech was only about Franklin on the surface. Madonna went on to tell about one of her own early singing auditions in Paris in which she sang a song Franklin made famous.

"Madonna's tribute to Aretha Franklin is Madonna telling a story about herself while acknowledging she loved the "Lady Soul" album. #VMAs"

On Tuesday, Madonna tried to explain. In an Instagram post she said she was asked to present the video of the year award and share any stories she had from her career that were connected to Franklin.

She also wrote that she could never do Franklin justice with a tribute amid the noise and tinsel of an awards show. 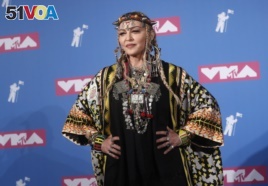 Other social media users also criticized Madonna for what she wore on the VMA stage at Radio City Music Hall. The Northern African style clothing and headpiece was protested as "cultural appropriation."

course - n. the path or direction that something or someone moves along

tribute - n. something that you say, give, or do to show respect or affection for someone

audition - n. a short performance to show the talents of someone (such as an actor or a musician) who is being considered for a role in a play, a position in an orchestra, etc.

tinsel - n. thin strips of shiny metal or paper that are used as decoration

appropriation - n. the act of taking or using something especially in a way that is illegal, unfair, etc.