Update Required To play the media you will need to either update your browser to a recent version or update your Flash plugin.
By Dan Friedell
20 June 2022


D. Exterior is a clothing company in Italy owned by Nadia Zanola.

She started the company in 1997 based on a small business her parents started in 1952.

Zanola has 50 workers in the northern city of Brescia. 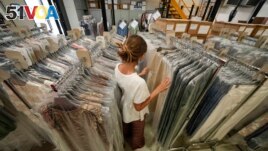 She is worried about the future of her company. She made a lot of clothing for people in Russia but, because of international economic restrictions, the stores that asked for the clothes cannot pay her.

The restrictions, known as sanctions, started earlier this year because of Russia's invasion of Ukraine. They are meant to punish Russia for the war by making it hard to send money to other countries or to receive goods.

The sanctions, however, are also making business difficult for people like Zanola who depend on sales in Russia. She has over $2 million worth of clothing she made for Russian stores for which she has not been paid.

"If they cannot pay for it, I will be on my knees," Zanola said. She called the situation "painful."

The sanctions are hurting a number of businesses in Italy that make costly goods made from cloth and leather, such as clothing and shoes. Italy is the largest producer of these kinds of high-cost products in the world. The industry adds $101 billion to Italy's economy each year.

While Russian customers only add about three percent of that total, any loss hurts the 80,000 small businesses supplying that market.

Fabio Pietrella is the president of a fashion industry trade group in Italy.

He said losing Russian customers takes away over 80 percent of the money the small businesses make each year.

Areas in Italy such as Marche, Veneto, Umbria and Emilia-Romagna depend on orders from Russia.

"These are districts that connect the supply chain," Pietrella said. He noted that if small producers close, it will hurt the "entire system that (makes) this country an economic powerhouse."

Some of the world's most famous fashion companies like Gucci, Versace and Armani are Italian. They are showing off their clothing for men this week in Milan.

A number of Italian companies such as Diesel, Benetton and Armani are still doing business in Russia. Their names appear on a list put together by Yale University business professor Jeffrey Sonnenberg. He called those companies "greedy." He noted that companies that continued selling goods to Nazi Germany after the start of World War II are not "celebrated."

Sonnenberg said clothing companies are not able to find ways to get past the sanctions the way the drug or agriculture industries do.

Other clothing companies in France and Spain broke ties with Russia when the war started. LVMH is a French business that includes fashion brands Louis Vuitton, Christian Dior, Givenchy and Fendi. LVMH is still paying its 3,500 Russian employees even though it is no longer doing business there.

Pietrella said he and the businesses he works for have "extreme concern over the aggression in Ukraine." He said there is no way to defend Russia's actions. But he added: "We have to think of our companies. Ethics are one thing, the market is another. Workers in a company are paid by the market, not by ethics."

For those who say the companies should find a new market for their products, he said that is easier said than done.

"If there was another market, we would be there already," Pietrella said.

For companies like Zanola's D. Exterior, it took many years to build business in Russia. It now makes up 35 to 40 percent of the $22 million her company brings in each year. D. Exterior is also under extra financial pressure because of rising energy and materials costs.

When Russia invaded Ukraine in late February, the company was already sending clothes that were ordered for the summer and taking orders for the winter. But by March, Zanola's customers in Russia were missing payments.

She said it is not likely she will get money for the 4,000 pieces of spring and summer clothes she is holding. And a contract said she had to go ahead and start making some of the winter clothes. If she cannot send the winter items to Russia she will lose at least $100,000.

She said Russian customers are good because they appreciate the extra work it takes to make nice clothes.

After working so hard to gain the customers she does not want to give them up.

She said she hopes people recognize the difference between Russian leader Vladimir Putin and the Russian people.

"Since Russia is not only Putin, one hopes the poor Russians manage to raise themselves up," she said.

customer –n. a person who pays for goods or services

supply chain – n. the systems and organization involved from manufacturing a product to providing it to a buyer

powerhouse – adj. a group or organization that has a lot of power and influence

fashion – n.(industry) the business of creating and selling clothes

greedy – adj. having or showing a selfish desire to have more of something especially more than what is needed

ethics – n. the rules of behavior based on ideas about right and wrong

appreciate –v. to understand the value or worth of something or someone