Update Required To play the media you will need to either update your browser to a recent version or update your Flash plugin.
By John Russell
26 December 2022


Fabrizio Cardinali, age 72, says he has no use for electricity.

For more than fifty years, he has lived entirely off the public electricity network, or grid.

That makes him one of the few people in Europe unconcerned about rising energy costs this winter. 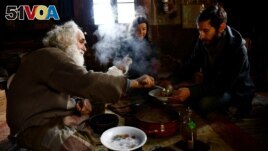 Fabrizio Cardinali, 72 and Cardinali's current housemates, Agnese, 35, and Andrea, 46, have lunch together at Cardinali's home in the woods of the small town of Cupramontana, Ancona, Marche, Italy, December 12, 2022. ( REUTERS/Yara Nardi )

Cardinali lives in a stone house near Ancona, on Italy's eastern Adriatic coast.

By choice, he has no electricity, no gas, and no indoor plumbing.

"I was not interested in being part of the world as it was going. So I left everything - family, university, friends, the sports team, and set off in a completely different direction," he said.

"You give something up to obtain something else that is more important," he said.

In the past, he lived alone.

Right now, he has two people who live with him, as well as animals such as a rooster, chickens and a cat. He calls the small community "The Tribe of the Harmonious Walnuts."

Harmonious means having parts that are related or combined in a pleasing way. But it can also mean not experiencing disagreement or fighting.

Cardinali and his friends, who gave their names only as Agnese and Andrea, use a wood-burning stove for cooking and warmth. They read by lamps fueled with used cooking oil that is given to them by neighbors.

"I feel privileged to have the freedom to choose my freedom," said Agnese, 35, who moved in two years ago. Andrea, 46, spends the week there but goes home to Macerata, about 50 kilometers away, each weekend to look after his mother.

The "harmonious walnuts" grow fruit and vegetables, olives to produce olive oil, and keep bees for honey. A local group sells them foods such as legumes, cereals and wheat, which they grind to make their own bread.

When possible, they trade goods for things they need.

Although some people have called him "the Hermit of Cupramontana," Cardinali says he is not a hermit. A hermit is a person who lives in a simple way apart from others.

Instead, Cardinali believes life is best lived in small communities.

His first piece of advice for anyone who wants to follow his example is: "Throw away your so-called smart phone."

Cardinali sometimes travels short distances to visit friends. He takes olives to a stone press to make oil, and walks or gets rides to the nearest town to have a coffee with local people or visit the doctor.

"I've been living this way for about 51 years and I have never regretted it," he said. Cardinali added, "there have been difficulties, but they never made me think that I made the wrong choice ...."

Yara Nardi and Matteo Berlenga reported on this story for Reuters. John Russell adapted it for VOA Learning English.

plumbing – n. a system of pipes that carries water through a building

walnut – n. a type of tree that produces large nuts which can be eaten; the nut of a walnut tree

privileged – adj. having special rights or advantages that most people do not have

regret –v. to feel sad or sorry for something you did or did not do