Update Required To play the media you will need to either update your browser to a recent version or update your Flash plugin.
By Jim Dresbach
13 November, 2015


Police in Europe won a battle in the war on terrorism Thursday with the announcement of arrests in a joint operation against suspected militants.

Officials say the operation targeted members of a Norway-based, Iraqi Kurdish terrorist group. They said the group used the Internet to reach new members, and sent them to fight in Iraq and Syria with the Islamic State group.

Police accused the group of plotting attacks against Norwegian and British diplomats in the Middle East. 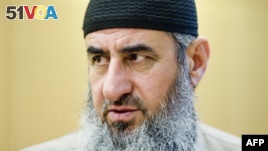 Najmuddin Ahmad Faraj, also known as Mullah Krekar, at court in Oslo. Italian police announced a swoop on a European jihadist network that was allegedly planning to try to spring its leader out of detention in Norway.

At least 13 people were arrested in Italy, Britain and Norway. In addition, police seized documents and other objects in searches of more than 20 premises. The searches were the work of officials from Italy, Germany, Finland, Norway, Switzerland and Britain.

Italian officials identified Najmuddin Faraj Ahmad as the ideological leader of the group. They said he is in prison in Norway. He is also called Mullah Krekar.

He was jailed earlier this year after being found guilty of urging others to kill a Kurdish immigrant in Norway. His Norwegian lawyer told reporters, "suspicions against Krekar have largely been based on false accusations.

Norway and the United States have accused him of financing the group Ansar a-Islam.

Jim Dresbach wrote this story for Learning English. It was based on reports from VOANews.com, the Associated Press and MSNBC. George Grow was the editor.

What do you think about these arrests? We want to hear from you. Write to us in the Comments section or visit our 51VOA.COM.

ideological – adj. having to do with the set of ideas and beliefs of a group or political party

premises – n. a building and the area of land that it is on